Space Sounds Like An Eerie Chorus Of 'Alien Birds'

Humans can't hear all the activity in the Van Allen belts as our ears respond only to sound waves. 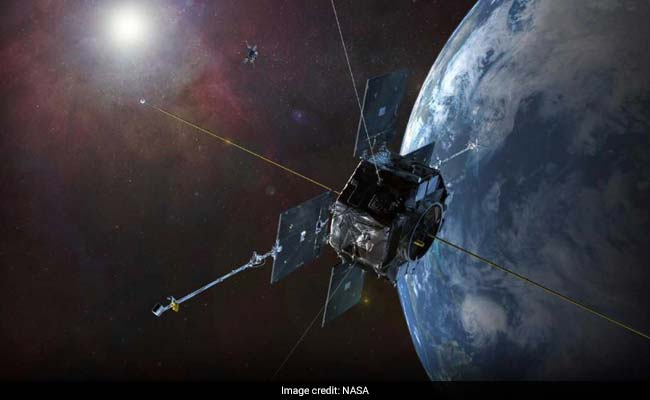 If you ask Craig Kletzing, the recordings echo the chirping of crickets. To his wife, they sound like a chorus of alien birds.

But there is no life where these sounds are made, in the dazzling and dangerous stream of highly charged particles that surrounds our planet. For years, Kletzing, a physics professor at the University of Iowa, has been monitoring the radio waves that undulate through the void around Earth. When the data is turned into sound files, the result is an eerie cosmic symphony.

Although space is a vacuum, it is neither empty nor quiet. Just above our atmosphere exist two belts of energetic particles from the sun that get trapped by Earth's magnetic field. This phenomenon is vital to making our planet livable; the captured electrons and protons zip back and forth between Earth's magnetic poles instead of streaming through the atmosphere to bombard the surface. But the zones where these particles dwell, called the Van Allen Belts, are still dangerous: The trapped particles pose a threat to satellites and astronauts at the International Space Station, and the belts play a role in space weather that can destroy power grids on the ground. 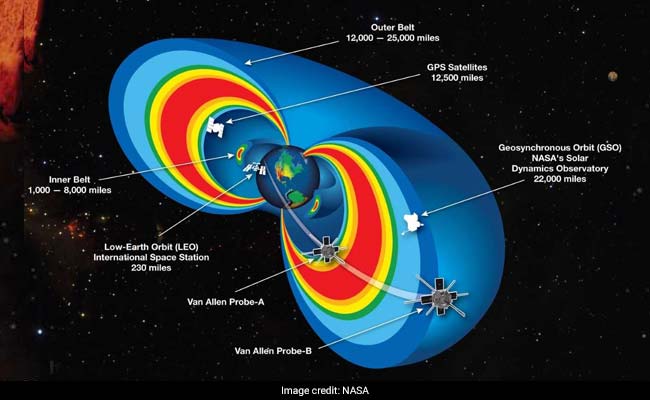 A cutaway model of the Van Allen radiation belts.

"There are lots of practical reasons," to be interested in the Van Allen belts, Kletzing said. The physics of this violent region is fascinating in and of itself. Fluctuating electric and magnetic fields plow through the cloud of charged particles, called plasma, stealing energy from some particles and giving it to others, pushing them to high speeds.

In 2012 NASA launched the Van Allen Space Probes, twin robotic crafts that orbit the Earth and monitor this roiling envelope of charged particles. The probes carried a suite of instruments called EMFISIS, short for Electric and Magnetic Field Instrument Suite and Integrated Science (apparently all aspiring physicists and astronomers take "Intro to Backronyms" before they get their PhDs). EMFISIS is designed to detect radio waves rippling around the Earth.

"It's literally like sticking a microphone out into space, but instead of listening to sound waves we're listening to electromagnetic waves," said Kletzing, EMFISIS's lead investigator.

Humans can't hear all the activity in the Van Allen belts. Our ears respond only to sound waves, which we sense via the vibration of molecules that are disturbed by the waves as they propagate through the air. Space is airless - practically void of matter - and therefore soundless.

But the electromagnetic waves are in the same frequency range as the part of the sound spectrum that is audible to humans. It was a simple matter to translate those radio waves as MP3s - turning EMFISIS data into a radio broadcast from the heavens.

One variety of wave sounded like Star Wars light sabers. These "whistler waves" were generated by lightning in the Earth's atmosphere, but escaped and bounced along the magnetic field. The lightning generates waves at multiple frequencies, and the faster (higher-pitched) waves reached the sensors just before the slower (and lower-pitched ones), resulting in the signature falling pitch that gives these waves their name.

When waves propagate through the plasmasphere - the shell of relatively low-energy plasma that encases the Earth just above the atmosphere - they generate what's known as plasmaspheric hiss.

Beyond the plasmasphere, where the plasma is warmer, electrons are pushed around in explosions generated by tangled lines of the Earth's magnetic field. As the particles from the sun are pushed toward the night side of the Earth, lower-energy particles create the "chorus" waves that Kletzing's wife said sounded like alien birds.

"There's a side of me that listens to it and says 'Wow, what interesting wave forms,' " Kletzing said. "But there's also a piece that just listens, and there's sort of an amazement at a certain level that the universe produces things that you recognize: birds, and in the background it sounds to me ... like crickets chirping."

The cricket-like sounds are compelling to Kletzing, not just because they evoke a languid summer evening. These sounds suggest that there could be smaller waves in space that trigger the larger ones - something Kletzing never noticed when he simply looked at the data on a computer screen.

Promoted
Listen to the latest songs, only on JioSaavn.com
"There's little bits of stuff in there that our ear can kind of pick out . . . that your eye on a plot doesn't do quite the same way," Kletzing said.