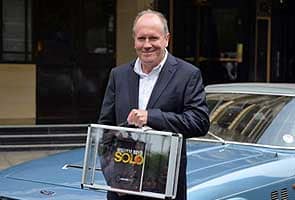 Fans of James Bond movies aren't likely to recognize the hero of this new James Bond novel. Fans of the original Ian Fleming books may have less trouble seeing aspects of their man here, if only dim resemblances. Which isn't to deny that "Solo," by William Boyd (who was tapped by the Ian Fleming estate to write the latest instalment of 007's adventures), is a perfectly well-carpentered and, at times, suspenseful novel. It just doesn't feature a hero, who - aside from some pretty generic traits like an eye for the ladies, an ability to kill and an appreciation for expensive cars and a good meal - really feels like the Bond we have come to know over the last five decades.

Of course, Boyd is working without the tools that filmmakers have at the ready: that atmospheric, instantly recognizable theme music; the razzle-dazzle car chases and explosions; and, most important, the talents of Daniel Craig or Sean Connery, the two actors who have come to embody James Bond thoroughly on screen. Boyd's hero lacks the psychological detail and taut existentialism of Craig's Bond, and he lacks the tough savoir-faire of Connery's.

He also seems oddly deficient in irony, style and dangerous competence - those essential Bond traits. Often, he comes across as more of a weary civil servant than one of Her Majesty's licensed-to-kill agents. When we first meet Boyd's Bond, he resembles any ordinary, upper-middle class Londoner on the verge of a midlife crisis: worried that he's coming down with a cold, thinking about changing his hairstyle and fretting about the renovations to his flat. His 45th birthday has summoned memories of his experiences during World War II, and he finds his mind repeatedly drifting back to the past.

Though "Solo" is set in 1969, Bond's assignment has little to do with the Cold War, which powered so many of Fleming's books. Instead, it involves an African civil war (which seems loosely based on the Nigerian-Biafran war that began in 1967) and a struggle over access to newly discovered oil reserves. Boyd has wisely divested his Bond of the casual racism that occasionally percolated to the surface in Fleming's novels, but he seems to have made other nips and tucks to 007 for no discernible reason.

Boyd's Bond drinks whiskey and soda, beer, bourbon, brandy or wine more often than his famous martinis. The car he covets is not an Aston Martin or a Bentley, but something called a Jensen Interceptor. And he sets off on his mission without his trusty Beretta or Walther PPK, armed only with some knockout drugs disguised as after-shave and talcum powder. There is little of the original novels' pulpy energy or of the movies' inventive fantasies here - not to mention less humor, and no glamour whatsoever.

After being told by M to go to the small West African country called Zanzarim and intercede in its devastating civil war, Boyd's Bond starts reading Graham Greene's "Heart of the Matter" in hopes that it might furnish some insights into the region. Once there, he starts having a crisis of confidence: "As his surroundings had grown more primitive and elemental, so, it seemed, whatever strength, capability and powers he possessed appeared more insubstantial and weak. What was it about Africa that unmanned you so? He wondered, turning over and punching the hard kapok pillow into a more amenable shape for his head - why did the continent so effortlessly remind you of your human frailties?"

Boyd grew up in Ghana and Nigeria and has written brilliantly about the continent before - in the hilarious 1982 novel "A Good Man in Africa" and "An Ice-Cream War" (1983), which was expansive and affecting. In this case, he does an evocative job of conjuring up the rugged landscape of the fictional Zanzarim, and describes his hero's adventures there with plenty of authority.

There is, however, an unnerving disjunction between the essentially escapist nature of the Bond genre and this novel's harrowing descriptions of the Zanzarim civil war and its fallout, including mass murders and villages filled with dead and starving children. There is a similar disjunction between Bond's traditional opponents - the evil Cold War SMERSH, or cartoonish madmen intent on wreaking nuclear havoc or achieving world domination - and the mission Bond is given in this novel by M: to neutralize (i.e., assassinate) a talented rebel leader known as the African Napoleon, who seems to be prolonging the war and standing in the way of what might benefit Britain, the United States and the oil companies in that region. For a character who, as Simon Winder noted in an insightful 2006 book, "The Man Who Saved Britain," arrived to uphold British self-esteem just as its vast empire was breaking up, it feels like an uncomfortably neo-imperialist assignment.

To be sure, there is a maniacal villain in "Solo": one Kobus Breed, a Rhodesian mercenary and clever psychopath, who is also out to exploit an African charity for his own nefarious ends. Breed has a gruesome penchant for having meat hooks driven through the jaws of his victims and stringing their corpses up in trees and threatens to do the same to Bond. The violent showdown between them is arguably the most Bond-like sequence in this novel. Readers will root for Bond, of course, but not because he's James Bond or a close facsimile thereof, but because he's this thriller's designated hero.