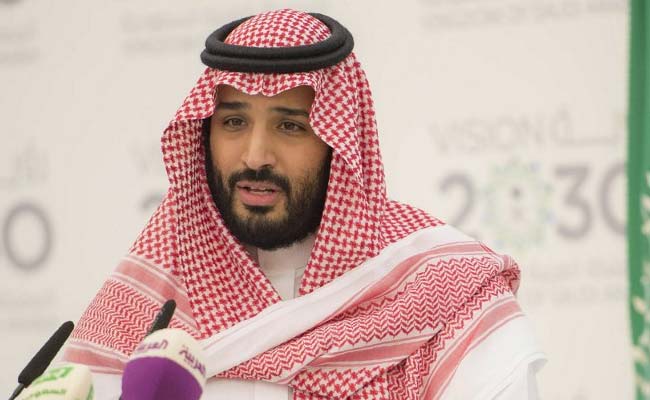 Deputy Crown Prince Mohammed bin Salman said the world's top oil exporter expects state oil company Saudi Aramco to be valued at more than $2 trillion ahead of the sale of less than 5 percent of it through an initial public offering (IPO).

He added that the kingdom would raise the capital of its public investment fund to 7 trillion riyals ($2 trillion) from 600 billion riyals ($160 billion).

The plans also included changes that would alter the social structure of the ultra-conservative Muslim kingdom by pushing for women to have a bigger economic role and by offering improved status to resident expatriates.

"We will not allow our country ever to be at the mercy of commodity price volatility or external markets," Prince Mohammed said at his first news conference with international journalists, who were invited to a Riyadh palace for the event.

"We have developed a case of oil addiction in Saudi Arabia," he had earlier told al-Arabiya television news channel.

The 31-year-old prince gave assured answers to questions on the plan, and appeared to pitch his comments to appeal across the Saudi social spectrum, and in particular to young people, who face unemployment and an economic downturn despite their country's oil wealth.

Even before oil prices started to plunge in 2014, economists had regarded Riyadh's fiscal policy and economic structure as being unsustainable, but reduced income from energy sales has made reform more urgent.

The plan appeared to lift sentiment on the Saudi stock market, where shares jumped by 2.5 percent in the heaviest trading for eight months, but it fell short of convincing sceptics that the kingdom can prosper in an era of cheap oil.

At the centre of the plan is the restructuring of its Public Investment Fund (PIF), which Prince Mohammed said would become a hub for Saudi investment abroad, partly by raising money through selling shares in Aramco.

Asked where Riyadh would find the funds for a $2 trillion dollar fund after recent borrowing, he said it would come from transferring the ownership of Aramco to the PIF.

He said it could "turn into a global investment fund with a size of up to $3 trillion dollars".

The partial privatisation of Aramco was also central to the plans, and Prince Mohammed said it would be transformed into an energy company that he expected to be valued at $2 trillion to $3 trillion, and that less than 5 percent of it would be listed on the stock market.

So big is the state oil company because of its rights to the kingdom's crude reserves, that selling even 1 percent of its value would create the biggest initial public offering (IPO) on earth, he said.

He said other Aramco subsidiary companies would also be listed along with other publicly held companies, and added that one major benefit of privatisation was that it would increase transparency and help limit corruption.

"People used to be unhappy that files and data of Aramco are undeclared, unclear and not transparent. Today they will be transparent. If Aramco gets IPO-ed that means it has to announce its statements of accounts," he said.

Since the prince was appointed to oversee Saudi long-term planning through the Council of Economic and Development Affairs, Riyadh's focus on reform has grown far more urgent and far more acute.

Prince Mohammed has enjoyed a dizzyingly rapid rise since his father became king 15 months ago, from being little known outside the ruling Al Saud family to become the driving force of Saudi plans to prepare for a future after oil.

In his rare press conference, he presented himself as a modernising leader who seeks to shake Saudi Arabia out of its economic slumber and its reputation for opacity and rigid bureaucracy, showing an interest in topics including education, the public role of women, and football.

Saudi Arabia would prepare a new education curriculum, Prince Mohammed said. Despite previous reform attempts, the kingdom's schools have long been seen as focussed on religious teachings rather than preparing students for a role in a modern economy.

Under the plans, Saudi Arabia would produce or assemble half of its defence equipment internally in order to create job opportunities, he said, and Riyadh would make foreign investment easier.

The government ran a deficit of 367 billion riyals ($98 billion) or 15 per cent of gross domestic product in 2015, officials said, and this year's budget plan aimed to cut that to 326 billion riyals ($87 billion).

His economic team has already announced efforts to curb wasteful government spending, to diversify revenue streams by introducing sales tax and privatising state assets, and to make reforms in the education sector.

Such was the speculation among Saudis over the details of the plan that hashtags associated with it were the top two trending on Twitter on Monday in the country with the highest rate of social media use in the Middle East.

But ambitious targets, such as raising the private sector share in the economy to 60 percent from 40 percent, reducing unemployment to 7.6 percent from 11 percent and growing non-oil income to 1 trillion riyals ($267 billion) from 163 billion riyals ($44 billion) were not explained further.

Some Saudis said they had hoped for more detail on crucial issues such as education reform. There were no further details of plans to increase revenue from tax or of any changes to the political structure of the absolute monarchy.

"For me as a Saudi, I am concerned by the education transformation plan," said a Saudi entrepreneur. "If it is not at the top of the list, why not?"

However, the plan also envisaged increasing women's participation in the workforce, something that has already grown quickly over the past five years, to 30 percent from 22 percent.

But he also said he did not believe Saudi society was ready to end its ban on women driving.

A green card system would also be launched within five years to enable expatriate Arabs and Muslims to live and work long-term in the country, Prince Mohammed said, in a major shift for the insular kingdom.

But the focus was on economic restructuring to help reduce oil dependence.

Appealing to Saudi youth, he ended his news conference by promising them a new Saudi Arabia.