Trump, barred from Twitter, for the first time lacks the ability to aim angry tweets at those who oppose him, and White House officials conceded that he has few ways to stem the tide. 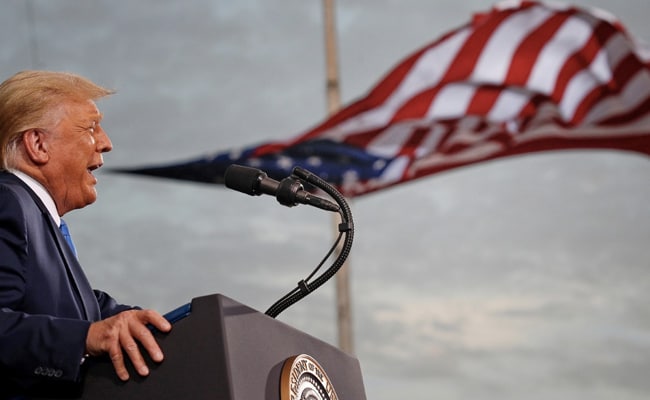 Trump, barred from Twitter, for the first time lacks the ability to aim angry tweets. (File)

The push for an unprecedented second impeachment of President Donald Trump took a bipartisan turn Tuesday, when several senior House Republicans joined the Democratic effort to remove him for his role in inciting a mob to storm the Capitol last week. The White House braced for more defections.

Katko's language was similarly strong. "To allow the president of the United States to incite this attack without consequences is a direct threat to the future of our democracy," he said.

Kinzinger added, "If these actions . . . are not worthy of impeachment, then what is an impeachable offense?"

A senior administration official said the White House expects at least a dozen Republicans to support impeachment in the House vote planned for Wednesday. The White House is rudderless, unwilling or unable to mount any defense other than saying that Trump will already be leaving next week, two administration officials said, speaking on the condition of anonymity to disclose internal dynamics.

Trump, barred from Twitter, for the first time lacks the ability to aim angry tweets at those who oppose him, and White House officials conceded that he has few ways to stem the tide. He has asked Sen. Lindsey Graham, R-S.C., to urge fellow Republicans to oppose impeachment, an official said.

The Republican statements supporting impeachment - which came after Trump delivered remarks earlier Tuesday expressing no regret for his actions - represented a watershed moment. They signaled high-level GOP concern about the role of Trump and other party leaders in spreading conspiracy theories about the recent election, and reflected how much the political landscape has shifted since Trump was acquitted in his impeachment trial in February.

In another potential sign of a changing atmosphere, Sen. Charles Grassley, R-Iowa, chairman of the Senate Finance Committee, scheduled a confirmation hearing for Treasury Secretary-designate Janet Yellen after weeks of delays in setting hearings for Biden's Cabinet picks.

Meanwhile, Senate Majority Leader Mitch McConnell, R-Ky., has been telling associates since the attack that Trump probably committed impeachable offenses, The New York Times first reported. McConnell, a close adviser said, has not decided how he will vote on impeachment and wants to hear the case first.

McConnell has not returned Trump's calls in weeks and remains livid with him, and he will not pressure his colleagues to oppose or support convicting the president. "He's not going to whip the vote," said the adviser, who spoke on the condition of anonymity to discuss private conversations.

Meanwhile, House Minority Leader Kevin McCarthy, R-Calif., has floated a censure of Trump to his caucus members as a potential alternative to impeachment, but most Democrats - including House Speaker Nancy Pelosi, Calif. - have dismissed that penalty as insufficient because it comes with no consequences.

The White House Counsel's Office has not drawn up a plan for combating the impeachment effort, an administration official said, and its legislative affairs team is not reaching out to lawmakers, unlike during Trump's first impeachment.

The endorsement of impeachment by top Republicans complicates the prevailing GOP message of recent days - that it is a needlessly divisive and partisan move.

House members prepared for a preliminary step toward impeachment Tuesday evening, taking up a resolution urging Vice President Mike Pence and the Cabinet to use their powers under the 25th Amendment to remove Trump immediately. Pence has given no signal that he intends to do so, however, and Pelosi has indicated that she will then move immediately to impeach Trump.

Democratic aides said they expected the full House to vote on impeachment no later than Wednesday night - one week after the Capitol invasion and one week before Trump is scheduled to leave office.

It is unclear how many more House Republicans would support impeachment. None joined the Democrats in December 2019 when they impeached Trump for urging Ukraine to investigate Biden and his son, but the Capitol attack has shaken up the political dynamic.

The formal debate over sanctioning Trump began Tuesday morning when the House Rules Committee readied the 25th Amendment resolution for the House floor. The mood of the debate went from somber to angry as lawmakers sparred about Trump's culpability - and one another's - for Wednesday's events.

"Rushing this resolution to the floor will do nothing to unify or heal the country," said Rep. Jim Jordan, R-Ohio. "These actions, again, will only continue to divide the nation."

In response, Rules Committee Chairman Jim McGovern, D-Mass., accused Jordan and others of having "given oxygen to the president's conspiracy theories" and said appeals to civility were coming too late.

"We all want healing, but in order to get to healing, we need truth and we need accountability," McGovern said.

Trump on Tuesday denied responsibility for last week's riot, telling reporters that "what I said was totally appropriate" when he addressed supporters before the assault.

At a rally that day, Trump urged his followers to head for the Capitol and "fight much harder" to prevent Biden's victory from being certified in Congress. "If you don't fight like hell, you're not going to have a country anymore," he said.

If the House impeaches Trump on Wednesday and transmits the charge to the Senate, as seems almost certain, Senate Democrats would immediately have to figure out how to hold an impeachment trial without bogging down Biden's agenda.

With Trump accused of "incitement of insurrection," Republican leaders are bracing for more defections. GOP lawmakers are openly considering whether to support impeachment, and Cheney gave them space to consider their options on a Monday conference call with colleagues.

She said that in light of Wednesday's violence, impeachment was a "vote of conscience" for lawmakers rather than a matter of party discipline.

Other GOP leaders, including McCarthy and Minority Whip Steve Scalise, R-La., have urged lawmakers to oppose impeachment, calling it needlessly divisive. And Trump's defenders in Congress signaled that they would not stand idly by.

Jordan, who promulgated conspiracy theories about election fraud and attended a "stop the steal" rally after the election, accused Democrats of a "double standard" because they had raised objections to the electoral votes of previous Republican presidents, including Trump and George W. Bush.

Democrats noted that in those cases, the losing candidate had long since conceded and many lawmakers who protested made clear that they accepted the election results, while at no point encouraging violence.

"What did the Democrats do? They put on pink winter hats, marched peacefully with a million people, joined Planned Parenthood, worked with their churches to try to reform America," Raskin said. "Nobody was out there agitating for a violent armed insurrection against the government."

Another Democrat, Rep. Ed Perlmutter of Colorado, pleaded with Jordan to acknowledge that the election was not stolen and that Biden had won.

"Yes, he's going to be president," Jordan said, but added, "There are serious problems with this election that deserve an investigation."

The sparring came as Democrats debated how to structure their steps after impeachment passes the House. The Senate is not scheduled to return to regular business until Jan. 19, a day before Biden's inauguration, meaning there would be virtually no chance of conducting a Senate trial and ousting Trump from office prematurely.

Senate Minority Leader Chuck Schumer, D-N.Y., called on McConnell to join him in invoking a provision that allows the Senate to convene early in cases of emergency, if both chamber leaders call for it.

"This is a time of emergency," Schumer said. "We could come back ASAP and vote to convict Donald Trump and get him out of office now, before any further damage is done."

Asked whether the House could delay transmission of the impeachment resolution, allowing the Senate to confirm at least some of Biden's Cabinet nominees before plunging into an impeachment trial, Pelosi declined to comment Tuesday.

Schumer also criticized Trump's comments disclaiming responsibility for the mob violence. The senator called it "a pathological technique used by the worst of dictators."

"Trump causes the anger, he causes the divisiveness, he foments the violence and blames others for it," he said. "That is despicable."

Democrats have discussed the potential for "bifurcating" Senate business so the chamber could approve nominees in the morning and hold a trial in the afternoon. But there is no modern precedent for doing that, and it would require cooperation from Republicans that they may be unlikely to grant.

Biden's allies are increasingly fretting that an extended Senate trial of an already departed president would significantly obstruct the early Biden agenda.

AFL-CIO President Richard Trumka told reporters Tuesday that "the trial cannot be allowed to distract from or delay the critical work of providing economic relief and economic opportunity for the American working people."

"We have to confirm a Cabinet, and we have to get economic relief to them very, very quickly," Trumka said.

Schumer said in a letter to colleagues Tuesday that "our work on behalf of the American people must not and will not be deterred," promising to deliver "the bold change our country demands."