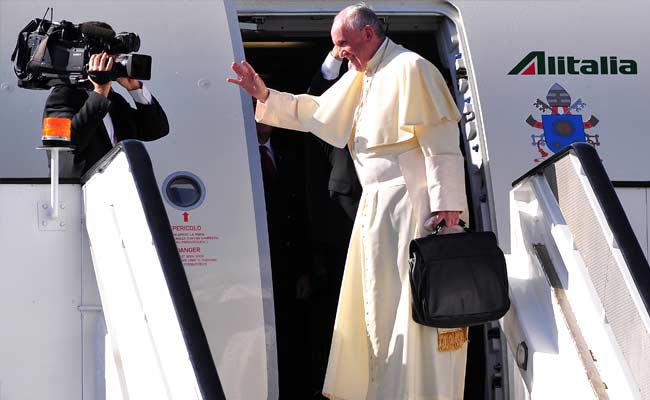 Pope Francis waves to the Catholic faithful as he boards his plane on November 27, 2015 in Nairobi on his way to Kampala, Uganda. (AFP)

Entebbe, Uganda: Pope Francis landed in Uganda today on the second leg of a landmark trip to Africa, with huge crowds, choirs and dancers celebrating as he touched down.

Francis arrived in Uganda after three days in neighbouring Kenya, where vast crowds turned out to an open air mass, and where the pontiff lashed out at corruption and wealthy minorities who hoard resources at the expense of the poor.

Veteran Ugandan leader Yoweri Museveni, widely expected to be reelected next year for his third decade in power, has said he is "honoured to host Pope Francis," saying the pontiff's "compassion for the poor and his frankness of spirit is an encouragement for all of us."

Large crowds gathered in Entebbe -- some 30 kilometres (20 miles) south of the capital Kampala -- where Francis will meet Museveni at the presidential palace later today.

Crowds gathered along the roads, four deep in some places, while street lights were draped with black, yellow and red banners, the colours of the national flag.

"This is my third pope but it can't be boring, we are blessed!" said 55-year-old Agnes Mubuya, sitting on a plastic chair on the pavement outside the printer where she works in Entebbe.

Wearing a yellow dress -- her Sunday best -- she had a laminated badge reading "Welcome Pope Francis to Uganda" pinned to the chest.

"I'd like him to talk about corruption, which is too much in Uganda. And we hope he can bring political change. He must talk to Museveni: if a pope can stand down why not a president?"

Police and soldiers, all armed with assault rifles or batons, lined the road and military pickups raced up and down the street.

"This is my third pope," said 60-year old Henry Mutambo, a Protestant, dressed in slacks and a loose, untucked shirt, who stood waiting on the grass verge close to the presidential palace.

"This latest pope, Francis, he cares for all the people, the whole universe, regardless of political or religious affiliation."

Security has been ratcheted up for the visit over fears Islamist rebels from Al-Qaeda's East Africa branch, the Shebab, could use the opportunity to stage attacks.

But chief of the defence forces Katumba Wamala has said measures are in place and expressed confidence "all will go as planned."