CPN-UML chairman Khadga Prasad, who is known for his pro-China stance, is tipped to become the new prime minister of the country. 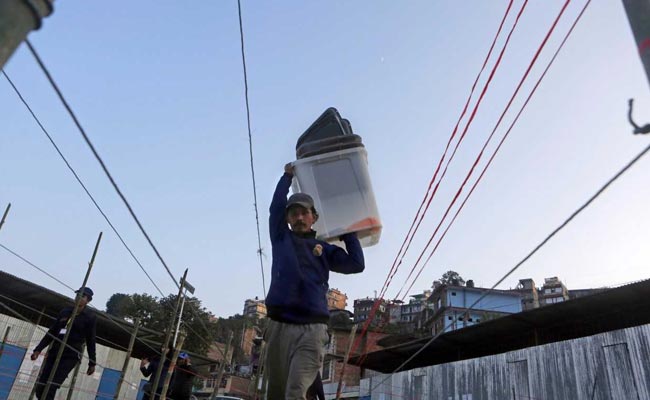 Left alliance bagged 116 seats out of a total 165 in the just-concluded parliamentary polls. (File)

Beijing: Nepal's Left party alliance which is set to form the next government would neither be "antiIndia" nor "pro-China" and maintain good relations with both the countries, a CPN-UML leader has said.

"Both (India and China) are our neighbours, we respect both neighbours. India is our neighbour. No Nepali will be anti-Indian," said Ishwor Pokhrel, general secretary of the CPN-UML.

He stressed that his party was neither "anti-India" nor "pro-China", with Nepal having many existing trade and transit agreements with New Delhi, Hong Kong-based South China Morning Post reported.

The Left alliance bagged 116 seats out of a total 165 under the first-past-the-post system in the just-concluded parliamentary polls. The governing centrist Nepali Congress has won just 21.

CPN-UML chairman Khadga Prasad, who is known for his pro-China stance, is tipped to become the new prime minister of the country.

Ishwor Pokhrel said the new government would be keen to develop ties with China, which he described as a "friend" who respected Nepalese sovereignty.

"We have to maintain good relations with China. We respect the one-China policy and we are very strictly against anti-Chinese activities," he said, in an apparent reference to Tibetans crossing over to Nepal to meet the Dalai Lama.

The Nepal government will also approve infrastructure projects with China after a majority government is formed in mid-January, including railway projects, motorways and hydroelectric schemes such as the Budhi Gandaki dam.

The Budhi Gandaki dam project was originally planned with state-owned China Gezhouba Group, but it was cancelled by the government on the eve of the elections, citing irregularities.

The procurement process for the dam project will be studied again, but it is not certain if the contract will be given to China Gezhouba, a Chinese construction and engineering company based in Wuhan, Hubei province.

"When Oli will become the prime minister, then we will take [the agreements] very seriously," Ishwor Pokhrel was quoted as saying by the report.

"Nepal is keen to get involved in China's Belt and Road trade and infrastructure initiative with other nations," he added.

KP Sharma Oli during his brief between 2015-16 signed the Transit Transport Agreement (TTA) to improve the connectivity between Nepal and Tibet in a bid to end decades old dependency on India for daily supplies.

During his visit here last year, China in a strategic move has also agreed to extend the railway line in Tibet to Nepal to improve the connectivity by road and rail.
Comments
Nepal PollsNepal's Left party alliance