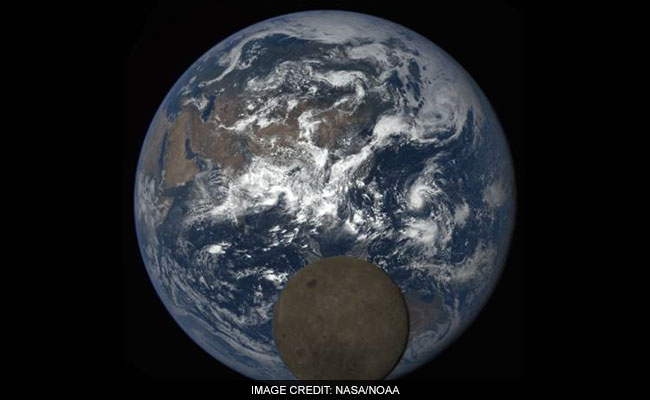 The images were captured by NASA's EPIC, a camera and telescope on the DSCOVR satellite.

Washington: For the second time in a year, a NASA camera aboard the Deep Space Climate Observatory (DSCOVR) satellite captured a stunning view of the moon as it moved in front of the sun-lit side of Earth.

"For the second time in the life of DSCOVR, the moon moved between the spacecraft and Earth," said Adam Szabo, DSCOVR project scientist at NASA's Goddard Space Flight Center in Greenbelt, Maryland.

"The project recorded this event on July 5 with the same cadence and spatial resolution as the first 'lunar photobomb' on July 16 last year," he added.

The images were captured by NASA's Earth Polychromatic Imaging Camera (EPIC), a four-megapixel CCD camera and telescope on the DSCOVR satellite orbiting 1 million miles from Earth.

Our #EPIC camera was collecting Earth data when the moon photobombed its way into the shot: https://t.co/z5VNJEWHQSpic.twitter.com/pjO0At9Y5R

From its position between the sun and Earth, DSCOVR conducts its primary mission of real-time solar wind monitoring for the National Oceanic and Atmospheric Administration (NOAA).

EPIC maintains a constant view of the fully illuminated Earth as it rotates, providing scientific observations of ozone, vegetation, cloud height and aerosols in the atmosphere.

The EPIC camera is providing a series of Earth images allowing study of daily variations over the entire globe.

EPIC takes a series of 10 images using different narrow band spectral filters -- from ultraviolet to near infrared -- to produce a variety of science products.