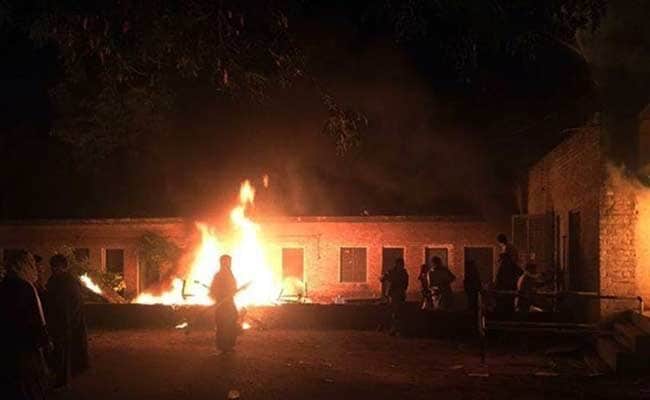 Pakistani residents torch a factory after one of its employees was accused of committing blasphemy in Jehlum on November 21, 2015. (AFP Photo)

Lahore: An enraged mob set on fire a factory and a place of worship owned by Pakistan's minority Ahmadi community after one of its members was accused of blasphemy in Punjab province.

The mob torched the factory in Jhelum district on Friday night.

Paramilitary Rangers were called in to control the law and order situation after an Ahmadi place of worship was also burnt down.

Spokesman of the Ahmadi community in Punjab, Aamir Mahmood, told PTI that around 2,000 people gathered outside the factory after announcements were made on loudspeakers in nearby mosques that a factory employee had allegedly desecrated the Quran.

"The mob torched the factory when its demand was not met.

Thank God none of the employees were burnt alive," he said.

Police reached the spot and dispersed the mob on assurance that it had registered a case against the employee identified as Tahir, also an Ahmadi, and arrested him.

But Mahmood said the police were not acting on his complaint that some clerics had incited the people to burn the factory.

Jehlum district official Mujhaid Akbar Khan said a case has been registered against the factory employee for allegedly desecrating the Quran.

"We have controlled the situation and are negotiating with the area people," Khan said.

Pakistan's Ahmadis consider themselves Muslim but were declared as non-Muslims by the Constitution and are also barred from proselytising or identifying themselves as Muslims. Some 1.5 million Ahmadis live across the country.