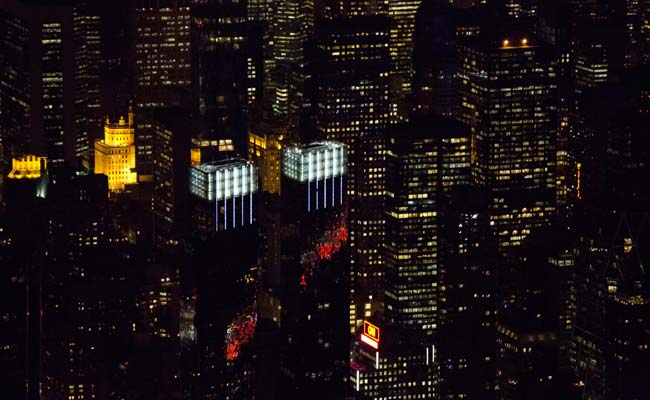 The Time Warner Center, in foreground, where at least 17 billionaires regarded as among the worlds richest people own condos, in New York, Dec. 30, 2014.(NYT)

On the 74th floor of the Time Warner Center, Condominium 74B was purchased in 2010 for $15.65 million by a secretive entity called 25CC ST74B LLC. It traces to the family of Vitaly Malkin, a former Russian senator and banker who was barred from entering Canada because of suspected connections to organized crime. Last fall, another shell company bought a condo down the hall for $21.4 million from a Greek businessman named Dimitrios Contominas, who was arrested a year ago as part of a corruption sweep in Greece. A few floors down are three condos owned by another shell company, Columbus Skyline LLC, which belongs to the family of a Chinese businessman and contractor named Wang Wenliang. His construction company was found housing workers in New Jersey in hazardous, unsanitary conditions.

Behind the dark glass towers of the Time Warner Center looming over Central Park, a majority of owners have taken steps to keep their identities hidden, registering condos in trusts, limited liability corporations or other entities that shield their names. By piercing the secrecy of more than 200 shell companies, The New York Times documented a decade of ownership in this iconic Manhattan way station for global money transforming the city's real estate market.

Many of the owners represent a cross-section of U.S. wealth: chief executives and celebrities, doctors and lawyers, technology entrepreneurs and Wall Street traders.

But The Times also found a growing proportion of wealthy foreigners, at least 16 of whom have been the subject of government inquiries around the world, either personally or as heads of companies. The cases range from housing and environmental violations to financial fraud. Four owners have been arrested, and another four have been the subject of fines or penalties for illegal activities.

The foreign owners have included government officials and close associates of officials from Russia, Colombia, Malaysia, China, Kazakhstan and Mexico.

They have been able to make these multimillion-dollar purchases with few questions asked because of U.S. laws that foster the movement of largely untraceable money through shell companies.

Vast sums are flowing unchecked around the world as never before - whether motivated by corruption, tax avoidance or investment strategy, and enabled by an ever-more-borderless economy and a proliferation of ways to move and hide assets.

Alighting in places like London, Singapore and other financial centers, this flood of capital has created colonies of the foreign super-rich, with the attendant resentments and controversies about class inequality made tangible in the glass and steel towers reordering urban landscapes.

Where it made landfall in New York, in the wake of the Sept. 11 attacks, was the Time Warner Center. More than a decade on, even as a row of sky-piercing palaces rises on the southern rim of Central Park, the Time Warner Center remains the New York archetype of the global phenomenon, reflecting intertwined trends - the increasing sums of foreign money in high-end real estate and the growing use of shell companies.

About $8 billion is spent each year for New York City residences that cost more than $5 million each, more than triple the amount of a decade ago, according to the website PropertyShark. Just over half of those sales last year were to shell companies.

The Times examination reveals the workings of an opaque economy for this global wealth. Lacking incentive or legal obligation to identify the sources of money, an entire chain of people involved in high-end real estate sales - lawyers, accountants, title brokers, escrow agents, real estate agents, condo boards and building workers - often operate with blinders on. As Rudy Tauscher, a former manager of the condos at Time Warner, said: "The building doesn't know where the money is coming from. We're not interested."

As an indication of how well-cloaked shell company ownership is, it took The Times more than a year to unravel the ownership of shell companies with condos in the Time Warner Center, by searching business and court records from more than 20 countries, interviewing dozens of people with close knowledge of the complex, examining hundreds of property records and connecting the dots from lawyers or relatives named on deeds to the actual buyers. Yet in some cases it is nearly impossible to establish with certainty the source of money behind shell companies.

The high-end real estate market has become less and less transparent - and more alluring for those abroad with assets they wish to keep anonymous - even as the United States pushes other nations to help stanch the flow of money leaving the country to avoid taxes. Yet for all the concerns of law enforcement officials that shell companies can hide illicit gains, regulatory efforts to require more openness from these companies have failed.

"We like the money," said Raymond Baker, the president of Global Financial Integrity, a Washington nonprofit that tracks the illicit flow of money. "It's that simple. We like the money that comes into our accounts, and we are not nearly as judgmental about it as we should be."

In some ways, officials are clamoring for the foreign wealthy. In New York, tax breaks for condominium developments benefit owners looking for a second, or third, residence in one of Manhattan's premier buildings. Mayor Michael R. Bloomberg said on his weekly radio program in 2013, shortly before leaving office: "If we could get every billionaire around the world to move here, it would be a godsend."

Among the Time Warner Center owners identified by The Times are at least 17 billionaires on Forbes magazine's annual list of the world's richest people. Five of the world's leading art collectors own units, as do eight people who have been chief executives of major companies. And it has been home to numerous celebrities, including the singers Jimmy Buffett and Ricky Martin, the New England Patriots quarterback Tom Brady and the talk show host Kelly Ripa.

A look behind some doors revealed more complicated tales.

Units 72B and 51E are owned by Amantea Corp., which The Times traced to a mining magnate named Anil Agarwal. His company was fined for polluting a major river near a copper mine in Zambia, which sickened nearby residents. And judicial committees in his native India determined that his company had violated the land rights of an indigenous tribe near a proposed mine.

When Anna Ai Fang purchased Condominium 58E in 2004 for $2.1 million, the forwarding address on the deed was a decidedly more modest location: her dorm, Ruggles Hall, at Columbia University. At the time, her father, Fang Fenglei, had ended a long career running state-affiliated banks in China and would soon begin working for Goldman Sachs.

Unit 62CE belongs to Prime International Management Group, which in turn is controlled by Alexander Varshavsky, who runs auto dealerships in Russia.

Few, if any, questions were raised by those involved in the deal when Varshavsky paid cash for the 4,300-square-foot apartment. But his condo shopping did not go unnoticed.

"In June 2011 defendant Varshavsky purchased an apartment located at that address for approximately $20.5 million in cash."

In December 2013, Varshavsky, who is now a U.S. citizen, was charged with failing to report the existence of a foreign bank account. A lawyer for Varshavsky disputed the allegations and said he expected the complaint to be dropped.

Meanwhile the case is pending, and Varshavsky posted bail - his Time Warner condo.

Across the United States in recent years, nearly half the residential purchases of over $5 million were made by shell companies rather than named people, according to data from First American Data Tree analyzed by The Times.

Federal banking guidelines are clear: "Banks should take all reasonable steps to ensure that they do not knowingly or unwittingly assist in hiding or moving the proceeds of corruption." This means screening customers to determine whether they are "politically exposed people" - foreign officials and their relatives and associates - and filing a "suspicious activity report" if the customers transfer unusually large amounts of money.

But such checks are not required on money flowing into the country through shell companies to purchase high-end real estate. LLCs and other corporate entities can be established in various states without revealing their true owners. Even when such companies move money through a bank account, banks are not required to know who is behind the transaction.

This opacity presents challenges for law enforcement officials, who say billions of dollars in suspicious money move through shell companies each year. "It can be very, very difficult to penetrate who is the beneficial owner of these shell companies," said Leslie R. Caldwell, chief of the Justice Department's criminal division.

When Bloomberg set out the welcome mat for the world's billionaires, the idea was this: Money they spent would trickle down to the doormen, concierges, cleaners, drivers and construction workers, as well as to the shopkeepers and restaurateurs who sell $5,000 handbags and $450 sushi dinners.

The precise impact of wealthy foreigners on the city may be more complex, though. As nonresidents, they pay no city income taxes and often receive hefty property tax breaks. A program aimed at new condo development doles out about a half-billion dollars in tax breaks a year, according to the city's independent budget office. These savings are passed on to owners in the form of lower property taxes.

The city's first condo costing more than $100 million, which sold in the last few weeks at the new luxury tower One57, had property taxes this past year of $17,268, according to the city's finance office. Those taxes will go up over time, but for now that is a savings of more than $359,000.

The Fiscal Policy Institute, a nonprofit in New York, recently suggested a downside to the influx of billionaires who are in the city only sporadically.

Promoted
Listen to the latest songs, only on JioSaavn.com
"In terms of the local economy, you don't have people who are going to plays, going to restaurants," James Parrott, the institute's chief economist, said. "They're not spending at the dry cleaners, the grocers and all of that, so it deprives New York of all that local multiplier effect."

Through a spokesman, Bloomberg said last month that he had hoped billionaires who moved to New York would not simply be part-timers but would live in the city and pay taxes "so we could use that revenue for government services that, incidentally, disproportionately benefit lower-income New Yorkers."