Andreas Hollstein was at a kebab shop in the west German town of Altena on Monday evening when a man asked if he was the mayor, shouted criticisms of his asylum policies and then lunged with a foot-long blade. 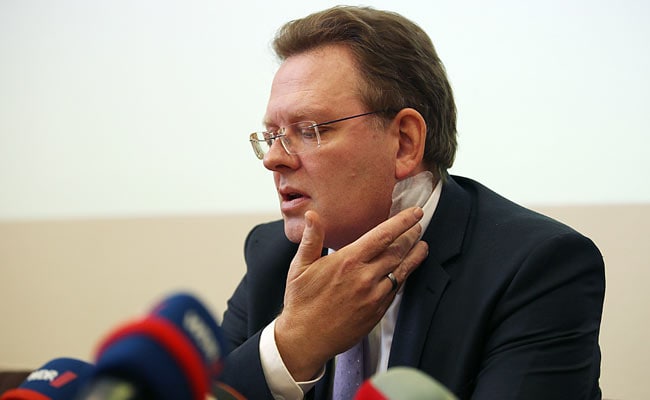 Andreas Hollstein was at a kebab shop when a man stabbed with a foot-long blade. (AFP)

Berlin:  A German mayor who had won accolades for his welcoming approach to refugees was recovering Tuesday after being stabbed in the neck in an attack that authorities said was politically motivated.

Andreas Hollstein, a member of Chancellor Angela Merkel's conservative Christian Democratic Union, was at a kebab shop in the west German town of Altena on Monday evening when a man asked if he was the mayor, shouted criticisms of his asylum policies and then lunged with a foot-long blade.

Hollstein was treated at the local hospital and released. At a news conference Tuesday, he credited the kebab shop owner, Abdullah Demir, as well as Demir's wife and son, with intervening to save his life.

"I'm sure that if they hadn't reacted like that, I wouldn't be alive now," Hollstein said, his neck wrapped in bandages.

Demir, who is of Turkish family origin, told the German tabloid Bild that the mayor had just ordered a Turkish kebab sandwich when the perpetrator, who appeared to be drunk, confronted him.

"I myself am hungry and thirsty," the assailant said, according to Demir, while the mayor "keeps bringing more refugees."

The state premier of North Rhine-Westphalia, Armin Laschet, said security services believed the attacker, who was taken into custody, had a political motive.

Merkel on Tuesday tweeted that she was "outraged by the knife attack on Mayor Andreas Hollstein, and very relieved that he is able to be back with his family. Thanks also to those who helped him."

"We must never accept attacks on people who are just helping others," tweeted Justice Minister Heiko Maas.

The attack comes at a time of growing concern over right-wing violence in Germany, two years after the European refugee crisis brought more than a million newcomers to the country.

The German daily Tagespiegel reported earlier this year that authorities had a list of more than 12,000 potentially violent right-wing extremists, significantly more than a year prior. The Interior Ministry said it had nearly 600 outstanding arrest warrants for right-wing offenders.

In September, Alternative for Germany became the first far-right party to win seats in the German Parliament in over half a century, having campaigned on an anti-Muslim, anti-migrant platform.

Monday night's attack on Hollstein echoed the stabbing two years ago of Henriette Reker, who was campaigning at the time to be mayor of Cologne, Germany's fourth-largest city.

Like Hollstein, Reker was stabbed in the neck in what authorities described as a backlash against her pro-immigrant stance. Reker, a Merkel ally, recovered from the attack and won the election days later.

In June 2016, on the eve of Britain's Brexit vote, pro-refugee British lawmaker Jo Cox was shot and stabbed to death by a far-right extremist

Hollstein's town, Altena, is in a pretty but relatively poor area on the banks of the Lenne River, about 50 miles northeast of Cologne. The town of 17,000 has struggled in recent years as factories have closed and the population has dwindled.

But amid the refugee crisis - as Syrians, Iraqis, Afghans and others driven from their homes by war fled to Germany - Hollstein was adamant that the town would do more than its share. It took in 350 people, as mandated by higher level authorities, then accepted 100 more.

Altena has been given national awards for its efforts to integrate the refugees, which include a town-run database that tracks newcomers' skills and attempts to match them to jobs.

Local media reported that Hollstein said Tuesday that because of his welcoming attitude, he had been the target of frequent abuse, receiving "anonymous emails soaked in hate."

Even after the attack, Hollstein, who is in his mid-50s, said he had received messages saying the attacker had done the right thing.

"My interest is in looking after the town's interests," he said. "That's what drives me."