For Saudis and Pakistan, A Bird Of Contention 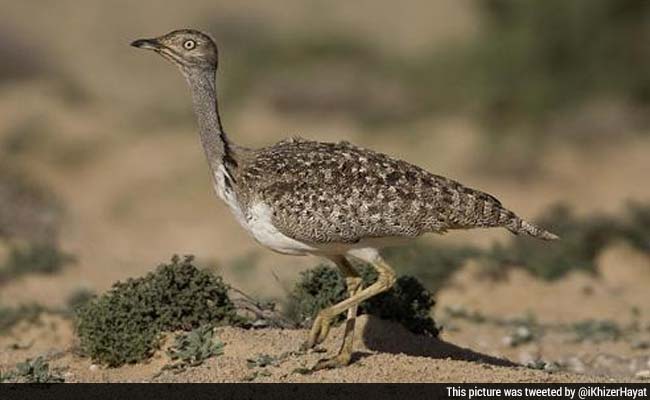 The Houbara Bustard, which is an endangered species.

For decades, royal Arab hunting expeditions have traveled to the far reaches of Pakistan in pursuit of the houbara bustard - a waddling, migratory bird whose meat, they believe, contains aphrodisiac powers.

Little expense is spared for the elaborate winter hunts. Cargo planes fly tents and luxury jeeps into custom-built desert airstrips, followed by private jets carrying the kings and princes of Persian Gulf countries along with their precious charges: expensive hunting falcons that are used to kill the white-plumed houbara.

This year's hunt, however, has run into difficulty.

It started in November, when the High Court in Baluchistan, the vast and tumultuous Pakistani province that is a favored hunting ground, canceled all foreign hunting permits in response to complaints from conservationists.

Those experts say the houbara's habitat, and perhaps the long-term survival of the species, which is already considered threatened, has been endangered by the ferocious pace of hunting.

That legal order ballooned into a minor political crisis last week when a senior Saudi prince and his entourage landed in Baluchistan, attracting unusually critical media attention and a legal battle that is scheduled to reach the country's Supreme Court in the coming days.

Anger among conservationists was heightened by the fact that the prince - Fahd bin Sultan bin Abdul Aziz, the governor of Tabuk province - along with his entourage had killed 2,100 houbara over 21 days during last year's hunt, according to an official report leaked to the Pakistani news media, or about 20 times more than his allocated quota.

Still, Fahd faced little censure when he touched down in Dalbandin, a dusty town near the Afghan border on Wednesday, to be welcomed by a delegation led by a Cabinet minister and including senior provincial officials.

His reception was a testament, critics say, to the money-driven magnetism of Saudi influence in Pakistan, and the walk-on role of the humble bustard in cementing that relationship.

"This is a clear admission of servility to the rich Arabs," said Pervez Hoodbhoy, a physics professor and longtime critic of what he calls "Saudization" in Pakistan. "They come here, hunt with impunity, and are given police protection in spite of the fact that they are violating local laws."

The dispute has focused attention on a practice that started in the 1970s, when intensive hunting in the Persian Gulf nearly rendered the houbara extinct there, and with it a cherished tradition considered the sport of kings.

As the houbara migrated from its breeding grounds in Siberia, newly enriched Persian Gulf royalty flocked to the deserts and fields of Pakistan, where they were welcomed with open arms by the country's leaders.

For the Pakistanis, the hunt has become an opportunity to earn money and engage in a form of soft diplomacy.

Although only 29 foreigners have been permitted houbara licenses this year, according to news media reports, they include some of the wealthiest and most powerful men in the Middle East, including the kings of Bahrain and Saudi Arabia, the Emir of Kuwait and the ruler of Dubai.

Their devotion to the houbara can seem mysterious to outsiders. The bird's meat is bitter and stringy, and its supposed aphrodisiac properties are not supported by scientific evidence.

But falcon hunting, and the pursuit of the houbara, occupy a romantic place in the Bedouin Arab culture.

In Pakistan, the lavish nature of the winter hunts, which take place largely away from public scrutiny, have become the stuff of legend. In the early '90s, it was reported, the Saudi king arrived in Pakistan with a retinue of dancing camels.

To curry favor with local communities, the Arab hunters have built roads, schools, madrassas and mosques, as well as several international-standard airstrips in unlikely places.

The only airport, at Rahim Yar Khan in the south of Punjab province, is named after Sheikh Zayed bin Sultan al-Nahayan, the former ruler of Abu Dhabi.

In recent times the hunts have also played a role, albeit unwitting, in the United States' war against al-Qaida.

Osama bin Laden took refuge at a houbara hunting camp in western Afghanistan in the late 1990s, by several accounts, at a time when the CIA was plotting to assassinate him with a missile strike.

The journalist Steve Coll wrote in his Pulitzer Prize-winning book, "Ghost Wars," that U.S. officials declined to take the shot, fearing that the Arab sheik who was hosting Bin Laden would have been at risk of dying in the attack.

For several years starting in 2004, the CIA used an Arab-built airstrip at Shamsi, a barren desert valley in central Baluchistan, to launch drone strikes against Islamist militants in Pakistan's tribal belt.

When news of the American base stirred a scandal in Pakistan's Parliament in 2011, the country's Air Force chief sought to deflect blame onto the United Arab Emirates government.

The deserts around Dalbandin, where Fahd landed on Wednesday, were the site of Pakistan's first nuclear test explosion in 1998, and are an established way station for heroin smugglers and Taliban insurgents.

But the growing influence of Gulf Arab countries is not universally appreciated. Progressive Pakistanis bemoan their conservative influence on society, and the infusion of petrodollars for jihadi groups.

The hunts have also come under attack. In Baluchistan, where the houbara is the provincial symbol, some royal hunts had to be curtailed after Baluch separatist rebels opened fire on hunting parties.

Now the battle has shifted to the capital, Islamabad. The Prime Minister, Nawaz Sharif, enjoys close relations with the rulers of Saudi Arabia, where he spent much of his exile between 2000 and 2007 - one reason, critics believe, for the indulgence shown toward Prince Fahd.

Sharif sent his federal planning minister, Ahsan Iqbal, to greet Prince Fahad in Dalbandin, as well as Baluchistan's minister for sports and culture.

Although Sharif never confirmed it, Saudi Arabia is widely believed to have injected $1.5 billion into Sharif's government last year to help prop up the ailing economy. Last year in Islamabad, Sharif laid out a lavish welcome for the other Saudi hunting permit holder: Salman bin Abdul-Aziz Al Saud, who last month was inaugurated as king.

The International Union for the Conservation of Nature has termed the houbara a vulnerable species, and India has banned the hunt. The Baluchistan court order in November cited Pakistan's obligation to international conservation treaties.

Hunt supporters say the houbara population has never been scientifically surveyed, and complain that the royal visits are being unnecessarily politicized.

"The foreigners are a blessing, not a problem," said Ernest Shams of Houbara Foundation International Pakistan, a charity that works with the United Arab Emirates government to boost houbara stocks. "They bring so much money into the country."

In a bid to overcome the court ban, the Baluchistan government has lodged an appeal in Pakistan's Supreme Court that is likely to be heard on Wednesday, officials in Islamabad said Friday.

Promoted
Listen to the latest songs, only on JioSaavn.com
Prince Fahd is currently at his hunting camp in Bar Tagzi, surrounded by his falcons and a contingent of security - and most definitely not hunting any houbara, according to Pakistani officials.

"They are visiting development sites," said Obaidullah Jan Babat, an adviser to the Baluchistan Chief Minister. "They are not hunting."
© 2015, The New York Times News Service