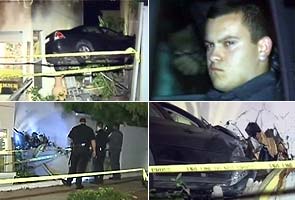 San Pedro, California: California police say one man is under arrest and another is being sought after an alleged drunk driver crashed into two homes, leaving his car suspended five feet (1.5 metres) above the ground in San Pedro early on Sunday morning.

Police at the scene said the alleged drunk driver drove his car over a kerb and it then crashed sideways, ending up wedged between the walls of two houses.

One of the houses suffered a severed gas line.

A resident of one of the houses said he thought he was experiencing an earthquake and waited for an aftershock before realising the shaking was the result of the car crashing into their house.

Police arrested the driver at the scene for suspicion of driving under the influence.

A crane was called to the scene to lift the car out of the houses.
Comments
california accidentcar accidentcar crash