Top security officials gave a blow-by-blow account of the arrest of Ovidio Guzman that led to chaotic scenes as cartel gunmen fought to free him. 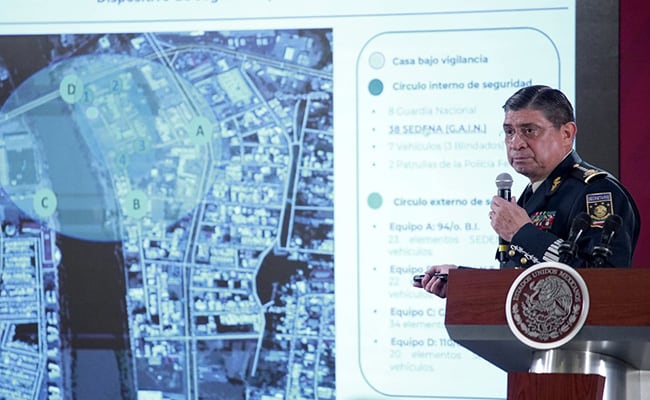 Mexico's government on Wednesday showed dramatic video footage of the moment when its forces briefly captured a son of kingpin Joaquin "El Chapo" Guzman this month before they were ordered to release the suspected trafficker to avoid a bloodbath.

With President Andres Manuel Lopez Obrador looking on, top security officials gave a blow-by-blow account of the arrest of Ovidio Guzman that led to chaotic scenes in the northern city of Culiacan as cartel gunmen fought to free him.

Facing threats to the public and relatives of the armed forces, the security cabinet ordered Guzman to be freed, leading to stinging criticism of Lopez Obrador that his actions had encouraged organised crime to hold the government to ransom.

"What could have become a scene of war and the shedding of innocent blood was resolved in favour of a return to peace and protecting the population," Security Minister Alfonso Durazo told a regular news briefing, defending his actions.

Shortly afterwards Defense Minister Luis Crescencio Sandoval played helmet camera footage of the Oct. 17 swoop by heavily armed military police on Ovidio Guzman in a residential compound near the centre of Culiacan in the state of Sinaloa.

Shouting and gesticulating, police are shown moving into the building. First a young woman with her face obscured emerges, followed by the slim figure of Guzman in a baseball cap.

Briefly Guzman was held with his hands against a wall, then he is seen talking on a mobile phone as police mill around.

Soon after police arrested Guzman, cartel gunmen surrounded the residence and staged gun battles and burning road blocks around Culiacan, causing widespread panic. Later that afternoon, police withdrew from the residence without him.

Ovidio's father, Joaquin Guzman, led the powerful Sinaloa Cartel for decades, escaping from prison twice before being arrested and extradited to the United States.

El Chapo Guzman was found guilty in a U.S. court in February of smuggling tons of drugs and sentenced to life in prison.

(Except for the headline, this story has not been edited by NDTV staff and is published from a syndicated feed.)
Comments
EL Chapo SonMexico