Despite several security features, the home is completely visible from the street. 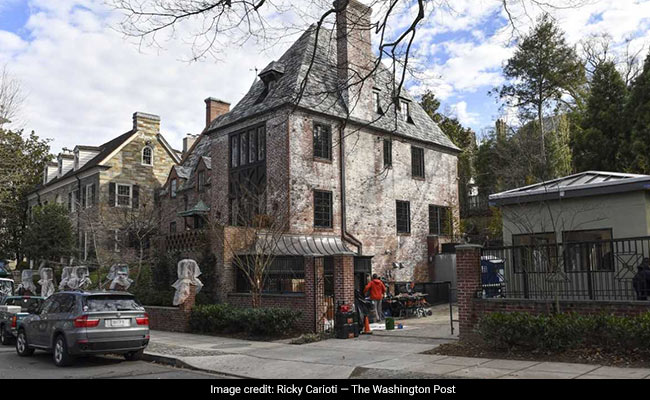 Barack and Michelle Obama purchased the nine-bedroom mansion for $8.1 million in 2017

In one of his most recent arguments for a southern border wall, President Donald Trump on Sunday falsely claimed that Barack and Michelle Obama's home here is surrounded by a 10-foot wall.

Trump's tweet comes in the midst of a partial government shutdown, which was spurred Dec. 22 by Trump's demand for $5 billion in funding for a U.S.-Mexico border wall. He alleged that the "wall" around the Obamas' mansion was necessary for the former first couple's "safety and security," adding that the United States needs a "slightly larger version!"

Trump's assertion came as a surprise to two of the Obamas' neighbors Monday, who told The Post that there is no such wall. The 8,200-square-foot structure, despite several security features, is completely visible from the street.

A neighbor, a longtime resident of the area who spoke on the condition of anonymity to preserve their privacy, said the president "has a very active imagination."

"There's a fence that goes along the front of the house, but it's the same as the other neighbors have," the neighbor said. "It's tastefully done."

The former president and first lady purchased the nine-bedroom mansion for $8.1 million in 2017, The Post previously reported. It's located in the affluent D.C. neighborhood of Kalorama, which is also home to Ivanka Trump and Amazon founder Jeffrey Bezos, who owns The Washington Post. Previous residents of the neighborhood include Woodrow Wilson, William Howard Taft, Warren G. Harding, Franklin D. Roosevelt and Herbert Hoover.

TMZ reported on construction to the residence in 2017 before the Obamas moved in, which the website also characterized as "a wall."

As The Post's Fact Checker notes, the Obamas added security fencing to a retaining wall in front of the home (it is not a compound) for the needs of the Secret Service. A guard booth was built, and fencing was added to the back.

"In trying to make the case for a high concrete border wall, Trump exaggerates about the Obama house in Washington, D.C. It is an 8,200 square foot Tudor-style home in the Kalorama residential area, but it is not a 'compound.' The Obamas added security fencing to an enlarged retaining wall in front for the needs of the Secret Service but there is not a ten-foot wall around the house; the front steps are open to the sidewalk. Chain link fencing, but no wall, was added to the back. While Trump says the border wall would be a 'slightly larger version' of the alleged Obama wall, he has previously described his proposed wall as 1,000 miles long, made of precast concrete slabs, rising 35 to 40 feet in the air," the Fact Checker wrote.

Some found the president's tweet irresponsible. Fred Guttenberg, the father of one of students killed in the Parkland school shooting, tweeted, "Are you seriously trying to put our former President at risk?"

The Secret Service did not immediately respond to a request for comment on Trump's tweet and security risks Monday morning.

A spokesperson for the Obamas declined to comment on Trump's tweet, and the White House did not respond to an email requesting more context on Trump's claim of a wall around the property.

Another neighbor said the Obamas' home is "100 percent visible from the street."

"There is no ten-foot wall in the front, back or sides of the house - and no wall is going up," the person said.

An editor at The Post who went to the residence Monday morning noted that part of the street was blocked off - neighbors say there are security checkpoints at either end of the street - but confirmed that a wall was not visible from their vantage point, either.

Trump continued to tweet about his proposed wall Monday morning, criticizing Democrats for rejecting the idea. The Senate approved a stopgap funding measure in late December that did not contain wall money but would have kept the government open until Feb. 8.

"They say it's old technology - but so is the wheel," Trump wrote. "They now say it is immoral- but it is far more immoral for people to be dying!

(Except for the headline, this story has not been edited by NDTV staff and is published from a syndicated feed.)
Comments
Donald TrumpBarack Obama's homeTrump on Obama's home