Coronavirus Cases On US Aircraft Carrier Rises To Nearly 23: Report

Coronavirus outbreak: Earlier this week three sailors were evacuated after testing positive for the virus, the first cases reported on a US Navy ship on deployment. 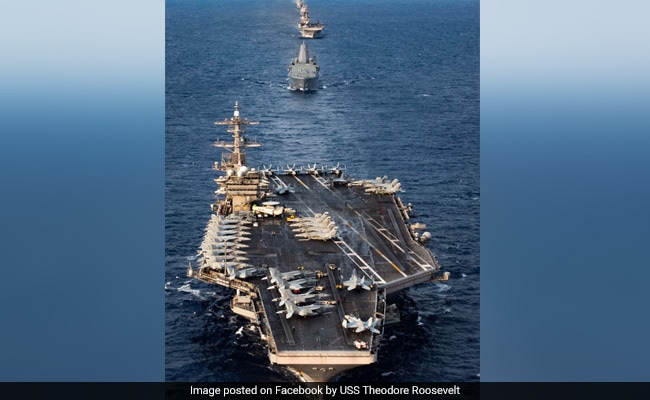 The USS Theodore Roosevelt was last in port in Vietnam

The number of coronavirus cases on the USS Theodore Roosevelt aircraft carrier in the Pacific Ocean has spiked to at least 23, with authorities moving to isolate the entire crew in port, US media reported.

Earlier this week three sailors were evacuated after testing positive for the virus, the first cases reported on a US Navy ship on deployment.

"Additional positive cases of COVID-19 have been discovered", Chief of Naval Operations Admiral Mike Gilday said in a statement Thursday, without specifying how many.

Mike Gilday added he expected further positive tests among the more than 5,000 personnel on board the warship, which is in Guam on a "pre-scheduled port visit."

None was seriously ill and none had been hospitalized, the admiral said.

The Wall Street Journal said there were now "at least 23" cases and quoted Acting Navy Secretary Thomas Modly as saying authorities were "in the process now of testing 100 percent of the crew."

"During the port visit, base access will be limited to the pier for Roosevelt's sailors. No base or regional personnel will access the pier," Modly said.

The USS Theodore Roosevelt was last in port in Vietnam, although Gilday said it was difficult to connect the cases to a particular port visit.

The Hawaii-based Indo-Pacific Command also said Thursday a joint US-Philippines-Australia exercise involving thousands of troops in the Philippines had been canceled over coronavirus fears.