Zhang wanted to fill a need that would help bring comfort and respect to the millions of people around the world who identify as transgender. 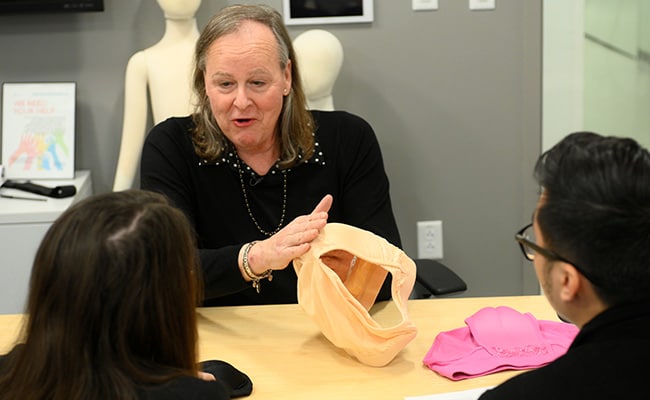 Willa Patsy Sharpe (60) speaks on her experiences with underwear (Reuters)

When graduate student Haobo Zhang decided to design underwear specifically for transgender women, his ambition was more high-minded than simply turning in a project to complete his master's degree in fashion at the University of Delaware.

Zhang wanted to fill a need that would help bring comfort and respect to the millions of people around the world who identify as transgender.

One of them is Willa Patsy Sharpe, a registered nurse named William Patrick Sharpe at birth, who agreed to submit to an intimate interview and a full body scan at the university's Innovation Health & Design Lab in Newark after answering a call for volunteers.

The computer-generated avatar created from the scan and insights from talking with Sharpe and other trans women will help Zhang create the first-ever transgender underwear designed for mass production, according to Martha Hall, director of the lab and an assistant professor of health sciences at the university.

"I want to help people who are previously ignored, make them feel comfortable and align with what they want to be," said Zhang, who is working with a lab team.

Zhang's project grew out of a conversation that Hall, his academic advisor, had with an underwear designer at Calvin Klein, the global fashion house.

"He suggested we work on a gender-fluid collection. I took it one step further," said Hall.

The 24-year-old Shanghai native said creating a vision for transgender underwear is exactly the kind of work he wants to undertake as part of his dream career as a functional designer.

"Functional design is apparel that makes people's life better. A garment can protect a fireman, a garment can help disabled people live more conveniently," said Zhang, who is not a native English speaker. "Some trans woman want to hide their genitals."

Sharpe, 60, a divorced father of two who "came out" at age 56, said most transgender women are not trying "to deceive the world" but simply want to be comfortable and feminine.

"There has got to be a way to flatten your jewels," said Sharpe, who also has three grandchildren.

Sharpe said she answered the laboratory's call for participants after other trans women told her of techniques they employed to conceal their male genitals, from wearing a double layer of women's panties to binding themselves with duct tape.

To be comfortable and natural-looking, Zhang said some trans women may need prosthetic enhancement in some areas and "tucking in" in others.

"I would like enough appearance that makes people second- guess, so that they don't automatically call me, 'Sir,'" said Sharpe, whose testicles have been surgically removed.

"Each time someone calls me 'Sir,' it's like a little dart that hits you. Sometimes you just have to deal with it. Like cry," Sharpe said.

Zhang's goal is to complete the project in order to graduate in May, and Hall hopes to expand its scope to trans men and possibly sell the underwear nationally.

But for Sharpe, the effort is much more than a fashion project.

"This study means not just understanding our community, but affirmation: You do exist," Sharpe said.