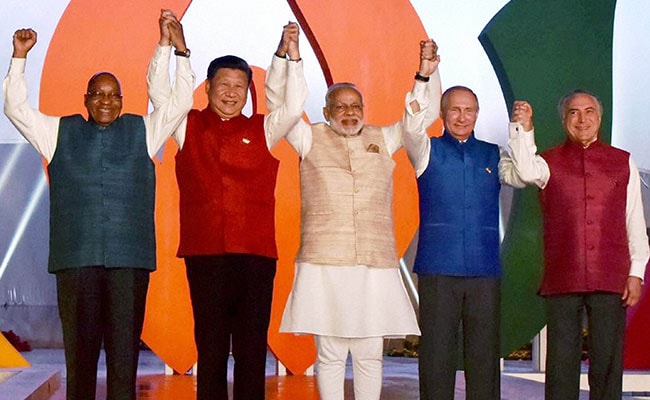 The BRICS Summit, an increasingly high-profile gathering of leaders from the emerging-market BRICS countries, is becoming a key driver of globalisation, an article titled 'BRICS create balancing influence in world affairs' in the state-run Global Times said.

"At the same time, the US presidential race appears to be soaked with isolationism and European integration is being shaken by the aftermath of Brexit," the article said.

It added: "Admittedly, BRICS nations have suffered some difficulties amid a worldwide economic downturn, prompting some to think that the BRICS are losing their luster. However, the emerging-market bloc has been transformed from a loose concept into a truly influential entity, and it is having an important impact on the world's order and globalisation."

In the political sphere, the BRICS are "helping to change the way in which the global governance model has always been centred around Western developed" economies, it said.

"The bloc has changed the post-Cold War world order, in which the global dominance of the US was enshrined, and has more broadly resisted the global hegemony of Western nations.

"BRICS nations, spanning Europe, Asia, Africa and Latin America, are of pivotal significance for containing Western influence and neo-colonial control, as well as for rectifying the unfair and unrighteous global governance regime," it said.

The article noted that "there is still substantial room for greater cooperation among the BRICS nations, but it needs to be pointed out that institutional obstacles remain".

"India, Brazil and Russia have not always been truly open in the fields of taxation, labour protection and foreign exchange control, and there are some narrow-minded populist sentiments opposing Chinese investment in these countries," it said.

"On top of that, despite the well-established industrial chains within BRICS nations, some of them still hold impractical views about building their own systems and excluding China's influence. If such impediments can't be removed, it will be hard for the BRICS to embark upon fully open development," it added.

But at the same, it said BRICS bloc has taken a raft of measures on the economic front - including the signing of trade deals and currency agreements and the establishment of the BRICS bank - that have" dramatically boosted the economic power of non-Western regions and also reshaped globalisation".

"It turns out that BRICS nations have become a key growth engine for the world economy, and this has resulted in a trend that is seeing globalisation returning to nurture," it said.

"Third World countries. Brazil, Russia, India and South Africa - the four BRICS nations other than China - are all key partners for China in pushing forward its national strategy of "One Belt and One Road" (Silk Road project)," it said.
Comments
BRICSBrics summitBRICS Summit 2016Brics Goa 2016China on BRICS