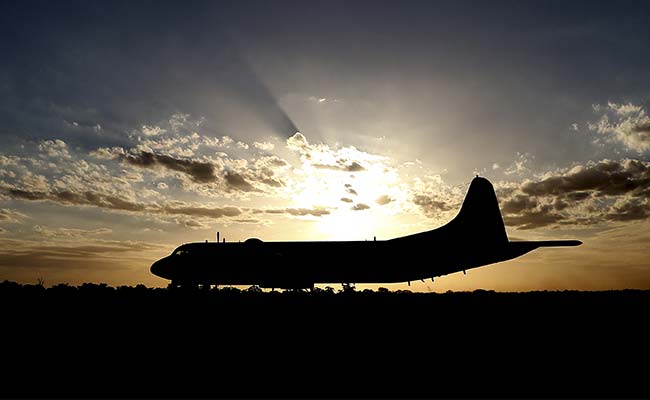 A Japanese patrol plane sits on the tarmac after arriving at Pearce Air Force Base to help with search operations for the missing Malaysia Airlines Flight MH370, in Perth, Australia

David Johnston, Australia's defense minister, described the search as taking place in "probably one of the most remote parts of the planet" and one that "has shipwrecked many sailors."

He said an Australian vessel, which Monday was scouring for possible debris spotted by an aircraft, was forced to deploy 120 kilometers, 0r 75 miles, to the south due to the weather conditions.

Johnston, speaking to reporters at Pearce Air Force Base, north of the western Australian city of Perth, took pains to say that despite several reports of possible debris from the plane having being spotted in the southern Indian Ocean, none had thus far been recovered, suggesting that any wreckage could be in a different area.

Describing a multinational search effort that included ships and aircraft from nations including China, Australia, Malaysia, South Korea, Japan and the United States, he called it "one of the largest efforts you'll ever see" in terms of maritime surveillance.

"We are not searching for a needle in a haystack - we are still trying to define where the haystack is," he told reporters at the air base.

In Kuala Lumpur, Malaysia, officials with Malaysia Airlines stressed that despite the lack of details about the plane's fate, the relatives of the passengers and crew must accept that their loved ones had almost certainly died.

Malaysian Prime Minister Najib Razak announced Monday that new data left no doubt that the plane had gone down in the ocean.

"We must accept the painful reality that the aircraft is now lost and that none of the passengers or crew on board survived," said Mohamed Nor Yusof, the chairman of Malaysia Airlines.

He stressed that the airline's primary responsibility now was caring for the grieving families and said that "the investigation still underway may yet prove to be even longer and complex than it has been since March 8th."

On Tuesday morning, relatives and friends of many of the 153 Chinese passengers on Flight 370 gathered outside the Malaysian Embassy in Beijing to demand that Malaysian officials tell them the truth about the fate of the flight. They went there despite assurances from the police that the Malaysian ambassador would come to their hotel to talk to them, an apparent effort to dissuade them from going to the embassy, according to people on the scene.

The group shoved past police officers as they left their hotel, arriving by foot at the embassy about 40 minutes later. The street was crowded with journalists, police officers and irate people trying to get past police roadblocks to reach some of the other embassies on the block, which included the U.S., Israeli and French embassies. A line of paramilitary police officers then blocked the road and prevented journalists from following the marchers.

As part of an ambitious multinational effort to find debris from the plane, the U.S. military said Monday it was sending an unmanned submersible craft capable of searching for wreckage using sonar systems. Known as the Bluefin-21 autonomous underwater vehicle, it was sent by air from New York and was expected to arrive in Perth on Tuesday.

Rear Admiral John Kirby, a Pentagon spokesman, told reporters that the submersible, which is shaped like a torpedo, would be useful only once the location of the wreckage was known.

"It's being sent there to be ready should there be a need," he said. "And right now, there's no need. We do not have a debris field."

The U.S. Navy has also dispatched a pinger locater, which is designed to be towed behind a vessel and listens for the signals emitted by the aircraft's voice and data recorders, known as black boxes.

The pinger locater, which will be towed behind an Australian commercial vessel, was used in the search for Air France Flight 447, which crashed into the Atlantic Ocean in 2009.

Promoted
Listen to the latest songs, only on JioSaavn.com
The Australian government also sent the amphibious craft ADV Ocean Shield to join in the search effort. Able to operate in sub-Antarctic weather conditions, it is equipped with a helipad and sonar.