Trump's bitter refusal to concede the election or participate in inaugural events meant there would be no customary tea service between the couples before Biden's swearing in. 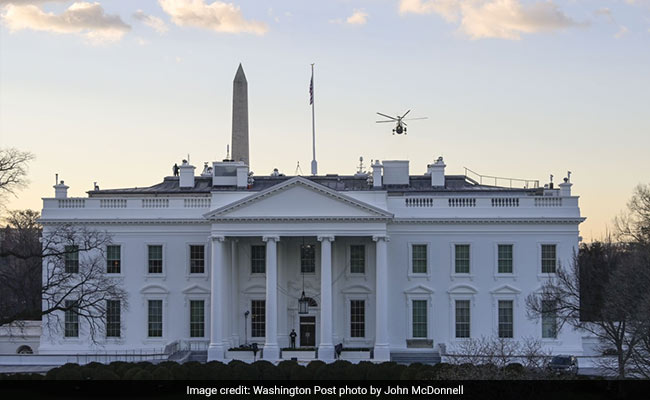 President Donald Trump departs from the White House on Marine One on Wednesday, Jan. 20, 2021.

President Donald Trump and first lady Melania Trump waved goodbye and boarded Air Force One on Wednesday, and successor Joe Biden, along with his wife, Jill Biden, emerged from Blair House, the presidential guest quarters across from the White House.

Television news cameras caught the dueling images as the Bidens headed to a morning church service and the Trumps flew to their new home at Mar-a-Lago in South Florida - bolting town without staying to welcome, or even acknowledge, the new occupants of the nation's most prominent address.

The scene captured the start of an extraordinary Inauguration Day that marked a historic break from some of the traditions that have long accompanied the nation's White House handoff.

Trump's bitter refusal to concede the election or participate in inaugural events meant there would be no customary tea service between the couples before Biden's swearing in. No outgoing president would observe the transfer of power during the inauguration at the Capitol; that duty was left to Vice President Mike Pence. And, finally, there was no gracious welcome for the new occupants of the White House, no handshakes and photographs taken on the portico of the two couples. 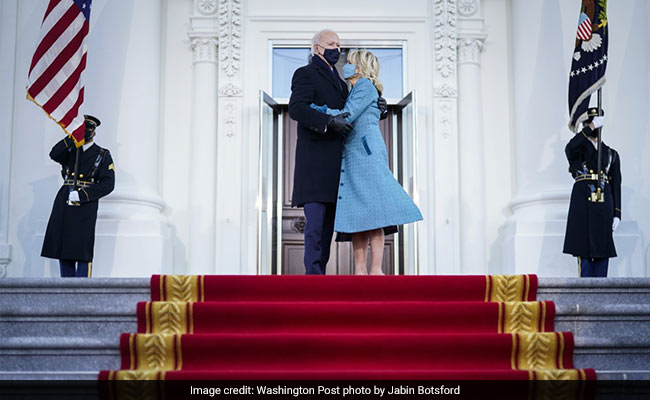 Other traditions, such as the presidential parade along Pennsylvania Avenue, were muted by the coronavirus pandemic and security concerns, with crowds kept far away. The presence of tens of thousands of police and National Guard troops, after the riot at the Capitol by a pro-Trump mob two weeks ago, created a feeling of oppressiveness during the otherwise celebratory occasion.

Yet change at the White House sped forward nonetheless, marked by milestones large and small as a team of government workers raced to complete the rapid and highly choreographed transition from one first family and staff to another.

Movers unloaded furniture and installed computers. Cleaning crews scrubbed the White House residence, the West Wing and the East Wing, giving them an extra-deep cleanse (at a reported costs of $500,000) after the departure of a Trump team that did not follow basic coronavirus safeguards. Workers hung framed photos on the West Wing walls, including a shot of Biden speaking at the New Castle, Del., airport on Tuesday - from a lectern bearing his late son Beau's name.

The anticipation among the new administration was palpable. Audio of Biden's inaugural festivities was piped through the White House press room's speaker system. One Biden aide, a veteran of the Obama White House, showed off to reporters where Biden's former West Wing desk used to sit.

"It's exciting, it's daunting, you feel the weight of responsibility," Cecilia Muñoz, a former domestic policy adviser to President Barack Obama, recalled of moving into the building after his inauguration in 2009. "To be honest, you feel a little bit, 'Oh, my gosh, what if I'm not up to it?' "

Biden and Vice President Kamala Harris took their respective oaths of office just before noon. By then, the Trumps had landed in Florida. Trump made no mention of Biden in his farewell remarks to a small group of family members and supporters on the tarmac at Joint Base Andrews before departing Washington, and Biden did not mention Trump during his inaugural address.

It was not clear whether the Trumps did the customary goodbye for the nearly 100 permanent White House staffers who tend to the residence and other quarters. Kate Andersen Brower, author of several books about White House traditions, said the staff generally enjoyed working for the Trumps, who seldom entertained and did not have complicated tastes in food.

She predicted that the Bidens, who are acquainted with some of the staff from the Obama years, would also get along well with the White House staff.

Even without a pandemic, first families get new mattresses, and the floors, walls, shades, chandeliers and other fittings are scrubbed or steamed. Pictures are removed or rehung, personal artifacts - even toiletries and clothes - are moved in and at the ready when the new occupants arrive.

The White House chief usher had worked with Jill Biden's staff for weeks to organize the move of household belongings. Before Wednesday, a spokeswoman for the General Services Administration said the agency would clean and disinfect "all furniture, flooring, window treatments, handrails, doorknobs, light switches, countertops, elevator buttons, restroom fixtures and dispensers, door handles and push plates, and lighting fixtures."

The handover is called the "transfer of families" and usually takes about five hours.

And there were other abrupt changes taking place. At noon, Biden inherited the @Potus account on Twitter from Trump's team - though the 45th president, who was banned from Twitter for his role in inciting the Capitol attack, had far more frequently sent tweets from his personal account.

At about the same time, Trump's White House website was archived for history, frozen in place for historical reference as fresh pages were uploaded for the Biden team.

By late afternoon, Biden and his family members were on their way to the White House, making their way along the parade route from the Capitol. The procession stopped on the Pennsylvania Avenue promenade, and the Bidens emerged from a fleet of limousines and strolled along the street to greet reporters and public officials, including D.C. Mayor Muriel Bowser, a Democrat.

The group walked through the towering security gates, then up the White House driveway. The first couple stopped outside the entrance, waved to reporters and, at 3:52 p.m., headed inside.

Awaiting Biden in a room adjacent to the Oval Office were two trays stacked with chocolate chip cookies, each one in plastic wrap with a gold presidential seal. Photographs of the earlier inaugural hours had already been framed and hung in the West Wing, including shots of tens of thousands of flags arranged on the National Mall.

Moving boxes were still being opened, with some marked "outer Oval." Aides and workers were trying to figure out who was who - many had mostly or entirely communicated through email during the pandemic. Adding to the challenge was that everyone in the building wore masks, reflecting pandemic guidelines from the new president.

In a small nod to tradition, Trump left a handwritten note for Biden, reportedly placed in the Resolute Desk by a military aide.

Shortly after 5 p.m., Biden entered the Oval Office and sat at his desk to sign executive actions reversing some of Trump's moves. Family photos in gold frames were displayed on a table behind him, where Trump had showcased a photo of his parents and a box of military challenge coins.

Asked about Trump's personal note, Biden called it "very generous" but said he would not disclose the contents "until I talk to him."

It was unclear whether or when that would happen.