At 500 Kilos, This Woman Is Believed To Be Fattest In The World 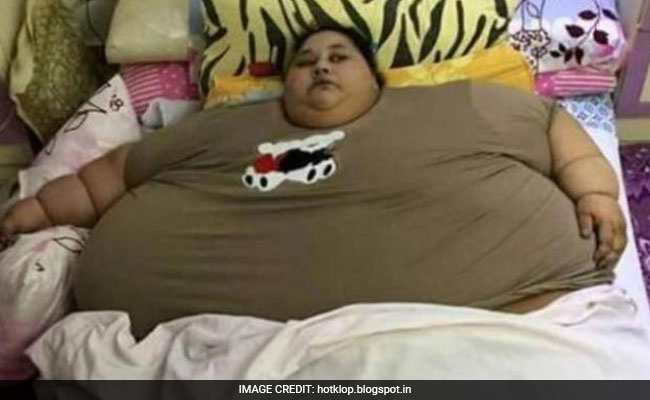 World's fattest woman, Iman Ahmad Abdulati has not left her home in Alexandria for 25 years.

Cairo: She weighs half a tonne, believe it or not. This Egyptian woman, tipping the scales at about 500 kg, is thought to be the fattest woman alive, media reports said on Sunday.

Only 36, Iman Ahmad Abdulati has not left her home in Alexandria for 25 years and is unable to move from her bed or even roll over because of her enormous size, the Daily Mail reported.

She relies on her mother and sister Chaymaa Abdulati to perform everyday tasks like eating, changing clothes, cleaning and relieving herself.

According to El Arabiya, she was born weighing a staggering five kg and was diagnosed with elephantiasis -- a parasitic infection that causes extreme swelling in limbs.

Physicians have also said that due to a "disruption of glands", her body stores and retains more water than it should.

As a baby, Iman learnt to get around using her hands. But by the age of 11 she couldn't support herself while standing up due to her weight and thus resorted to crawling around the house.

She had to drop out of primary school after suffering a cerebral stroke, which left her bedridden.

Promoted
Listen to the latest songs, only on JioSaavn.com
Since then, Iman has remained in her room -- totally stationary and unable to do anything.