India so far has dismissed Imran Khan's efforts to mend ties, and blasted his latest statement for an "unwarranted reference" to Kashmir. 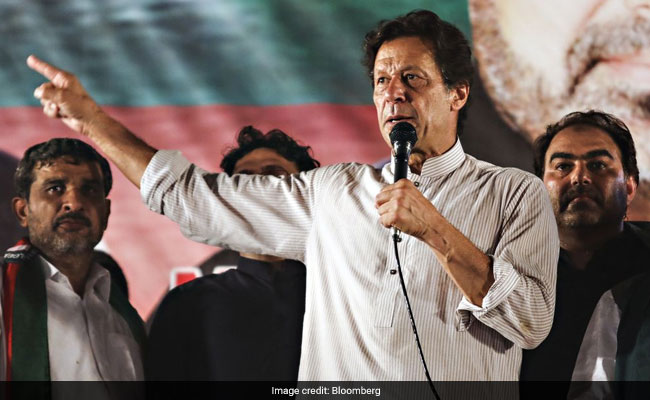 Pakistan's military is making an unusually strong effort to mend ties with arch-rival India, as top generals worry about a deteriorating economy amid fractious relations with U.S. President Donald Trump.

Current and former Pakistani military officials have told Bloomberg that both a slowing economy and pressure from Beijing to improve ties with the West is prompting the shift on India. At the same time, they said, Pakistan is also wary of becoming too dependent on China after Trump cut some $2 billion in security aid.

Among the proponents of a detente with India is Pakistan's powerful army chief, General Qamar Javed Bajwa, who once served under an Indian general during a stint with a United Nations peacekeeping mission and is seen as more moderate than his predecessors. Entering his final year in office, Bajwa last week called a move to ease border controls with India for visiting Sikh pilgrims "a step towards peace which our region needs."

The army chief has publicly supported China's Belt and Road Initiative, which has unleashed financing for more than $60 billion worth of projects -- adding to debt that has forced Pakistan to seek another International Monetary Fund bailout. But he is thought to be uneasy about Pakistan's over-reliance on Beijing, according to Western diplomats who asked not to be identified so they could speak freely about senior generals.

"From the outset of his term, General Bajwa was heavily inclined to end the state of 'No Peace, No War,' but recognized that shifting views inside the huge Pakistan army would take time," said Shuja Nawaz, author of a book on the armed forces and a former IMF official who is currently a distinguished fellow at the South Asia Center at the Atlantic Council in Washington. "This may be another incentive to launch a peace initiative."

The military's press department didn't respond to a request for comment.

Pakistani Prime Minister Imran Khan, who surprised many by calling for talks with India in his July election victory speech, said last week his political party and the military are "all on one page" in wanting to mend ties and resolve the conflict over Kashmir. His government is in the midst of negotiating Pakistan's 13th IMF bailout since the late 1980s.

Since taking office in August, Khan has sparred repeatedly with Trump. Just a few weeks ago they traded barbs after Trump said the U.S. no longer gives Pakistan billions of dollars because "they don't do a damn thing for us" in fighting terrorism.

So far, there's no indication that Pakistan's outreach will prompt Trump to reconsider aid money, which was cut due to insufficient efforts to deny extremist groups safe haven and freedom of movement. A spokesman for the U.S. Embassy in Islamabad declined to comment.

But there are small signs that relations are improving. This week Trump sent Khan a letter asking for Pakistan's help in facilitating talks with the Taliban to end the 17-year war in neighboring Afghanistan, a move welcomed in Pakistan. And Lieutenant General Kenneth McKenzie, nominee to become commander of U.S. Central Command overseeing Pakistan, said the military relationship between the countries was "strong."

"It is important to remember that we are asking Pakistan to focus a significant fraction of their national power away from what they perceive to be an existential threat," he said.

Fear of Indian dominance continues to dictate strategy in a military that has directly ruled Pakistan for almost half its 71-year history. Since partition, Pakistan has fought three major wars with its larger neighbor and both nations accused the other of supporting cross-border insurgencies.

Pakistan's military is the most powerful organization in the country, and has long been seen as one of the main obstacles to peace with India. Leaders in New Delhi have accused Pakistan's generals of stoking tensions with India in part to justify military spending that -- along with debt servicing -- consumes nearly 60 percent of the annual budget.

Any detente with India would face deep skepticism that has endured since the British left the subcontinent in 1947. Both India and the U.S. see Pakistan as providing safe haven for terrorist groups, and often bring up the fact that the leadership of Lashkar-e-Taiba, which carried out the gruesome Mumbai attack in 2008, still live freely in Pakistan.

"Saying that the military is on board suggests to the Indians that this time it will be different, since Pakistan's military and intelligence apparatus has been perceived as disruptors to formal rapprochement processes," said Shamila Chaudhary, a former White House and State Department official and now a fellow at Johns Hopkins University School of Advanced International Studies.

Though with elections due in the first half of next year "re-establishing dialogue with Pakistan absent any progress on justice for the Mumbai attacks or actions on terrorism is too much of a political football for India," she said.

India so far has dismissed Khan's efforts to mend ties, and blasted his latest statement for an "unwarranted reference" to Kashmir. One serving army officer in Pakistan said the military was well aware New Delhi was unlikely to reciprocate before elections, but the olive branch was a diplomatic maneuver to win global goodwill.

India views Pakistan's overtures as insincere, according to an Indian government official who asked not to be identified. Pakistan is simply seeking to convince the international community that it's genuinely working toward peace even though there's no actual movement on India's demands for more action to arrests terrorists, particularly those involved in the Mumbai attacks, the official said.

While Khan appears sincere, he and Pakistan's generals must realize India won't reciprocate unless something is done about Lashkar-e-Taiba, according to Madiha Afzal, the author of 'Pakistan Under Siege' and a visiting fellow at The Brookings Institution in Washington.

"This is an easy win for both Khan and the army," she said of the outreach to India. "And one they can both agree on without changing the army's fundamentals vis-a-vis India."