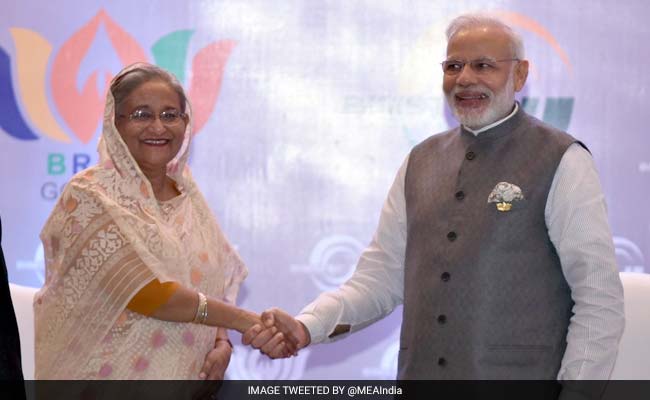 India is likely to give Bangladesh a third credit line when Sheikh Hasina visits India in April.

India is likely to give Bangladesh a credit line of at least $3.5 billion for infrastructure projects during Prime Minister Sheikh Hasina's state visit in April, as Beijing and New Delhi jostle for geopolitical influence in South Asia.

The credit line, which would be India's third to its neighbor, would go toward a variety of projects ranging from nuclear and liquefied natural gas power plants to ports, railways and the establishment of special economic zones, according to a Bangladesh government document seen by Bloomberg. New Delhi and Dhaka will also sign a defense cooperation agreement and various memorandums of understanding relating to hydro projects in Bhutan, shipbuilding and upgrading border posts, according to a separate document.

India is trying to strengthen relationships with neighboring states such as Bangladesh and Sri Lanka as China continues to court South Asian nations by pledging large sums of money for port and infrastructure projects that New Delhi views with suspicion. In a sign of its deepening ties with Beijing, Bangladesh bought two submarines from China last year.

The government of Indian Prime Minister Narendra Modi, who announced a second $2 billion line of credit when he visited Bangladesh in 2015 after an earlier $800 million credit line, has tried to integrate the region's economies with road, rail and shipping routes.

But even as India seeks to unite its neighbors against its arch-rival Pakistan, New Delhi's financial fire power still pales in comparison to the funds available to Chinese President Xi Jinping, who last year pledged $20 billion in low-cost loans for infrastructure projects, in addition to existing large investments in Pakistan and Sri Lanka.

"Ideally, they would like to counter that, but the Chinese offer is such a huge amount, they can't possibly match that," said Harsh Pant, an international relations professor at King's College London.
Hasina's visit, starting April 7, is her first in seven years, according to India's foreign ministry, and comes against the backdrop of a fresh surge in Islamic State-linked attacks across the country. Bangladesh's growth is expected to increase to 7.2 percent this fiscal year from 7.1 percent last fiscal year, according to government estimates.

"India will give Bangladesh as much as $5 billion, which is a new development," Mashiur Rahman, economic affairs adviser to Hasina, said by phone. "There are many areas to look at, but economic cooperation is the most substantive. Joint investments and joint entrepreneurship will open up the new directions of cooperation."

A spokesman for India's Ministry for External Affairs, Gopal Baglay, said he could not comment on the issue. Oil minister Dharmendra Pradhan said he expects some agreements to be signed after the meeting between the two leaders. "We are discussing several energy projects with Bangladesh, such as LNG and supply of petroleum products."

The two countries would agree to upgrade some customs posts, as well as establish border markets for vendors, along their 2,545-mile (4,096-kilometer) boundary, and will sign memorandums of understanding relating to shipping routes and the operation of satellites, according to the documents. The $3.57 billion figure listed in the documents does not include funds related to upgrading the border posts.

India and Bangladesh were also expected to sign MoUs relating to shipbuilding and a joint investment in a hydro power project in Bhutan.

Promoted
Listen to the latest songs, only on JioSaavn.com
Seeking to make India a global power, Modi has made progress in boosting ties with Sri Lanka and Bangladesh, said Pant, the professor. Both countries joined India in boycotting a meeting of the South Asian Association for Regional Cooperation last year, which was set to be held in Pakistan. And on March 23, Bangladesh signed a deal to join a South Asian satellite project being launched by India -- a project that includes all South Asian nations except Pakistan.