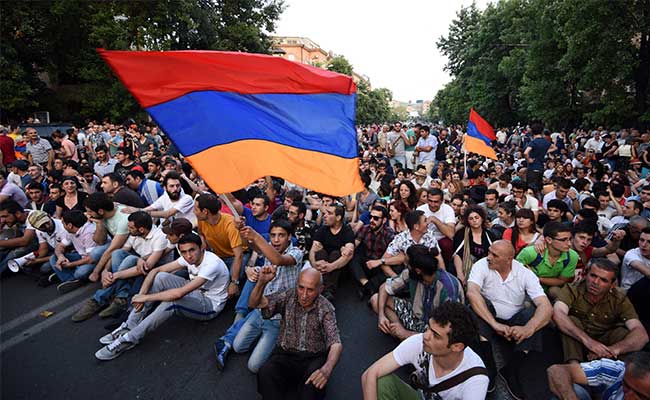 Demonstrators wave their national flags as they sit during a protest against the increase of electricity prices in Yerevan, the capital of Armenia, on June 22, 2015. (Agence France-Presse)

The spokesman for Armenia's special investigative service, Mikael Aharonyan, told AFP that the inquiry had been opened into alleged police violence, abuse of power and obstructing journalists.

If found guilty, officers could face up to six years in prison.

The South Caucasus nation of 3.2 million people has been rattled by two weeks of protests over plans by a Russian-owned company to increase electricity prices by 16 percent from August.

In late June, hundreds of riot police moved in against protesters using batons and water cannon in the largest anti-government demonstrations the ex-Soviet nation has seen in years.

After studying evidence, including videotapes of the clashes, the investigative service said that police officers had exceeded their powers 'in an obvious manner', used violence against demonstrators and journalists, and 'inflicted significant damage on the legitimate interests of society and the state.'

In an earlier concession to the protesters, President Serzh Sarkisian announced last week that the government would temporarily 'bear the burden' of the higher prices pending an audit of Armenia's power distribution company.

The daily rallies in the capital Yerevan have gradually dwindled, with a few thousand people still gathering in the city centre in the evenings.

Both Armenian activists and Sarkisian denied the rallies were anti-Russian.

But grievances against Moscow, which owns some of Armenia's most prized economic assets, have long been building in a country hit hard by the economic crisis in Russia.

Relations suffered a huge blow in January when a soldier serving at the Russian military base in the tiny Caucasus nation murdered a local family of seven, including a six-month-old boy.

On Thursday, demonstrators observed a moment of silence in honour of the baby, who would have turned one.
Comments
ArmeniaRussiaCaucasusSerzh SarkisianMikael AharonyanYerevanMoscowspokesman for Armenia's special investigative serviceSouth CaucasusCriminalRussian Military