Ukrainian officials said on Tuesday night that Babchenko, a Kremlin critic, had been gunned down in his apartment building in Kiev. 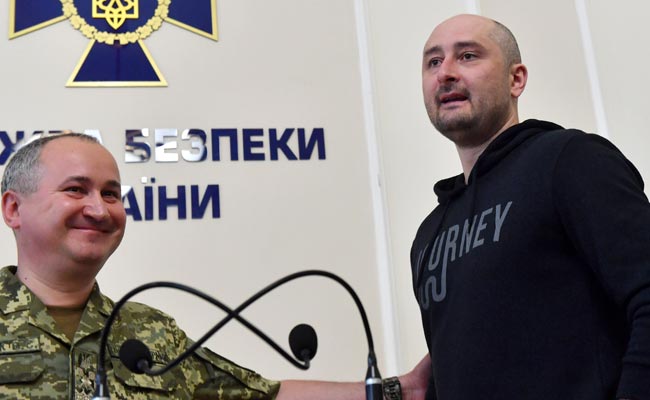 A day later, Babchenko walked to the podium at a televised news briefing about his death

KIEV, Ukraine: Dissident Russian journalist Arkady Babchenko said on Thursday he collaborated in a plot to fake his own death because he feared being targeted for assassination like former Russian spy Sergei Skripal.

Ukrainian officials said on Tuesday night that Babchenko, a Kremlin critic, had been gunned down in his apartment building in Kiev. Pictures of his body in a pool of blood were published and officials suggested Russia was behind the assassination, something Moscow flatly denied.

A day later, Babchenko walked to the podium at a televised news briefing about his death. Ukrainian security officials said they staged his apparent murder to thwart and expose a Russian plot to assassinate him.

That drew criticism from some media defenders and commentators who questioned whether the ruse and the false outpouring of grief and finger-pointing at Russia it generated had undermined credibility in journalism itself and in Kiev, handing the Kremlin a propaganda gift in the process.

Babchenko hit back in a joint interview in Kiev on Thursday, saying that he had gone along with the ruse, organised by Ukrainian security officials, because he feared for his life.

"Everyone who says this undermines trust in journalists: what would you do in my place, if they came to you and said there is a hit out on you?" Babchenko said, saying concerns about his life had to take precedence over worries about journalistic ethics.

Babchenko said he was exhausted after playing out the elaborate ruse. When Ukrainian security officials had approached him with information about a Russian plot to kill him, "my first reaction was: 'To hell with you, I want to pack a bag and disappear to the North Pole.'"

"But then I realised, where do you hide? Skripal also tried to hide," he said.

British authorities say that Skripal, a former Russian double agent, was poisoned in March with a military-grade nerve agent in the English city of Salisbury where he lived after leaving Russia in a spy swap.

Britain says Russia is culpable for the poisoning, an allegation Moscow denies.

Babchenko said he now lived in a secure location and felt safe for now.

His reported murder kindled a war of words between Ukraine and Russia, which have been at loggerheads since a popular revolt in Ukraine in 2014 toppled a Russian-backed government in favour of a pro-Western one.

It also produced international condemnation, in part because several prominent Russians critical of Putin have been murdered in recent years, three of them in Ukraine. Opposition groups and human rights organisations say the Kremlin is behind the killings. The Kremlin denies this.

Babchenko disclosed for the first time details of how he had helped fake his own death.

He said that a make-up artist had come to his apartment to give him the appearance of a shooting victim, that he was given a T-shirt with bullet holes in it to wear, and that pig's blood was poured over him.

He played dead, he said, while medical teams - who were in on the ruse - took him to hospital in an ambulance and then certified him as dead and sent him to a morgue.

"Once the gates of the morgue closed behind me, I was resurrected," Babchenko said, saying he had then washed off the fake blood and dressed himself in a sheet.

"Then I watched the news and saw what a great guy I had been," he said, referring to media tributes to him after his death was widely reported.

Asked about his next steps, he said: "I plan to get some decent sleep, maybe get drunk, and then wake up in two or three days."

He quipped that nobody had shown him a letter from President Vladimir Putin ordering his murder, but that despite initial scepticism he now believed assertions from the Ukrainian security service that he had been targeted in a Russian plot.

While saying he did not know why Russian authorities would want to kill him, he said he personally loathed Putin, whom he accused of starting several wars and being responsible for thousands of deaths.

Late on Thursday a Kiev court ordered the detention of a man who Ukrainian prosecutors say was involved in the plot and who had handed over $15,000 to a would-be killer.

The suspect Borys Herman, the co-owner of a weapons manufacturer, said he had been contacted by someone in Russia about plans to kill Babchenko but instead turned this information over to the Ukrainian authorities and worked on counterintelligence operations with them.

"I got a call from a longtime acquaintance who lives in Moscow, and in the process of communicating with him it turned out that he works for the fund of Comrade Putin precisely to orchestrate destabilisation in Ukraine," he said.

"We knew perfectly well that there would be no killing," he said, adding his work was done "only for the benefit of Ukraine."

The Kremlin, which had called accusations of Russian involvement "the height of cynicism", said on Thursday it was glad Babchenko was alive, but found the staging of his death strange.

Interior Minister Arsen Avakov said he was surprised and shocked by "pseudo-moral" criticism from abroad, while Anton Gerashchenko, a prominent lawmaker and adviser to the minister, said the operation had been vital in order to trace the trail from the would-be assassin to his handlers.

They had to believe the plan to kill Babchenko had succeeded "and force them to take a number of actions that will be documented by the investigation," he wrote on social media.

"After all, Arthur Conan Doyle's hero Sherlock Holmes successfully used the method of staging his own death for the effective investigation of complex and intricate crimes. No matter how painful it was for his family and Dr. Watson."

"Relieved that Arkadiy #Babchenko is alive!" tweeted the office of Harlem Desir, media representative of the European security and rights watchdog OSCE. "(But) I deplore the decision to spread false information on the life of a journalist. It is the duty of the state to provide correct information to the public."

A senior EU diplomat in Kiev said Ukraine's actions were understandable, but hoped the authorities would provide more information about what had happened.

"No one is angry, unlike some in other places, but we hope(Ukraine) understands that international goodwill is a finite resource - even if they are right and it's a war against a superior enemy," the diplomat wrote to Reuters in a message.
© Thomson Reuters 2018

(Except for the headline, this story has not been edited by NDTV staff and is published from a syndicated feed.)
Comments
Russia journalistArkady BabchenkoKremlin