"The doctors are with them now," Secretary of State Mike Pompeo said. "All indications are their health is as good as could be, given what they've been through. They all walked up the stairs themselves through their own power." 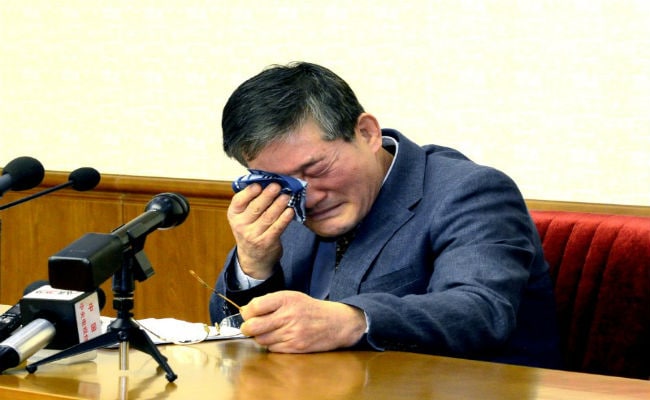 Kim Dong Chul said he was a naturalized American citizen and was arrested in North Korea. (File)

PYONGYANG, North Korea: North Korea released three American prisoners into the custody of Secretary of State Mike Pompeo here Wednesday, an action the White House welcomed as a "gesture of goodwill" ahead of a planned summit between President Donald Trump and Kim Jong Un.

Trump made the announcement in a morning tweet as Pompeo flew the three men out of Pyongyang on his government plane, saying they were in good health and that he planned to meet them upon their arrival early Thursday at Joint Base Andrews outside Washington.

The secretary is "in the air and on his way back from North Korea with the 3 wonderful gentlemen that everyone is looking so forward to meeting," Trump wrote. In a follow-up tweet, he called it: "Very exciting!"

The dramatic disclosure capped a 13-hour visit by Pompeo to the North Korean capital during which he met with several top officials, including Kim for 90 minutes, and finalized a time and location for the leaders summit, which is expected in late June.

Though White House officials did not disclose details, Trump told reporters the summit would not be held in the demilitarized zone between North Korea and South Korea - where Kim and South Korean President Moon Jae-in held an emotional meeting two weeks ago. That left Singapore, which Trump said last week was also under consideration, as the most likely site.


Trump had not made the freeing of the three Americans, Kim Dong-chul, Tony Kim and Kim Hak-song, a prerequisite for the summit. But the move was viewed in Washington as a necessary trust-building measure ahead of the hard-knuckle negotiations over the North's nuclear weapons and ballistic missile programs.

The president had harshly criticized the Kim regime over human rights violations, repeatedly raising its treatment of American college student Otto Warmbier, who died last summer days after being released in a coma from 17 months of captivity. The release of the other three Americans, who were examined by a physician traveling with Pompeo and reportedly boarded the plane without assistance, allowed Trump to claim a victory in his audacious diplomatic gambit.

"Frankly, nobody thought this was going to happen and I appreciate Kim Jong Un doing this and allowing them to go," Trump said at a Cabinet meeting Wednesday afternoon.

Yet even as Trump expressed optimism about the summit, other senior administration officials sounded caution that the United States will not prematurely soften its stance toward North Korea. Last year, the North conducted nuclear and ballistic missile tests in violation of a U.N. Security Council resolution, prompting Trump to derided Kim as "Little Rocket Man."

In a statement, Vice President Mike Pence vowed that the United States "will not let off the pressure until we achieve full denuclearization." White House press secretary Sarah Huckabee Sanders called the release of the Americans a "step in the right direction" but emphasized that "total denuclearization remains our top priority."

On Capitol Hill, Rep. Joaquin Castro, D-Texas, a member of the House Foreign Affairs Committee, commended Trump and Pompeo for their efforts. But he added: "Let's also remember that we have gotten to this point with North Korea before and things fell apart."

On Wednesday, a North Korean official told Pompeo that Kim had granted the three Americans "amnesty' on charges of espionage and hostile acts against the government - charges that U.S. officials have said were bogus. The three detainees were treated as "prisoners of war" and had not been seen since June, when a State Department official was allowed a brief visit with them while collecting Warmbier.

"You should make care that they do not make the same mistakes again," the North Korean official said, according to a U.S. official who recounted the exchange to two reporters traveling with Pompeo. "This was a hard decision."

A lingering question is whether the release of the three men will take the issue of human rights off the table at the Trump-Kim summit, even though Japan and South Korea also have had citizens who were abducted or arrested by North Korea. Kim's regime has imprisoned tens of thousands of North Koreans in brutal labor camps.

In a statement, Warmbier's parents, Fred and Cindy, said: "We are happy for the hostages and their families. We miss Otto." The family has sued North Korea in federal court for the mistreatment and death of their son.

During Pompeo's second visit to Pyongyang - coming after a secret trip over Easter weekend while serving as CIA director - he was greeted by Kim Yong Chol, a former North Korean intelligence chief, and Ri Su Yong, the influential former foreign minister. Ri is close to Kim Jong Un, having served as ambassador to Switzerland while the young leader attended school there.

Kim Yong Chol, who is in charge of relations with South Korea, and Ri, responsible for international relations, had just returned from the northeastern Chinese city of Dalian, where Kim Jong Un held talks with Chinese President Xi Jinping, their second meeting in China in 40 days.

Pompeo told the officials over lunch that if North Korea gives up its nuclear weapons, the country can "have all the opportunities your people so richly deserve."

"For decades, we have been adversaries," Pompeo told Kim Yong Chol, a man sanctioned by the United States for his involvement with the country's nuclear program but who has emerged as one of the regime's key interlocutors.

"Now we are hopeful that we can work together to resolve this conflict," Pompeo said before lunch featuring poached fish, duck and red wine at the Koryo Hotel, a large, double-towered building in central Pyongyang.

Kim Yong Chol appeared to be in an effusive mood, telling Pompeo and the dozen or so staffers traveling with him that this was a good time to be in Pyongyang because a good atmosphere had been established between North Korea and South Korea.

But he emphasized that "everything is going well in Pyongyang now" and emphasized that Kim Jong Un's decision to turn the regime's focus from nuclear weapons development to economic growth is "not a result of sanctions that have been imposed from outside."

That remark appeared to be an attempt to contradict the Trump administration's assertion that its "maximum pressure" approach had brought North Korea to the negotiating table. Asked about the comment, Sanders said at the White House that Trump has made clear he believes that "the maximum pressure campaign has worked" and pointed to his coordinated efforts with China, Japan and South Korea to isolate the North.

On the flight out of Pyongyang, Pompeo told reporters, including one from The Washington Post, that there were "no glitches" during his visit and called it "very productive."

He added: "I think that Chairman Kim is trying to set good conditions for the summit."

Pakistan's Counter-Terrorism Steps "Important But Not Irreversible": US