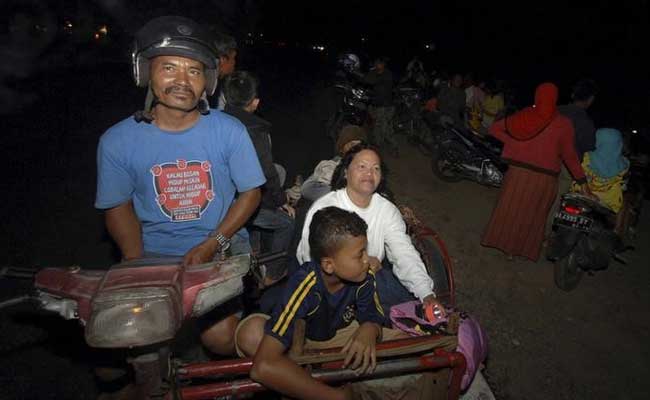 Residents flee to higher ground after an earthquake struck off the west coast of Sumatra, in the city of Padang, West Sumatra, Indonesia March 2, 2016. (Reuters Photo)

Jakarta, Indoesnia: A massive quake struck on Wednesday off the Indonesian island of Sumatra, a region devastated by the 2004 Indian Ocean quake and tsunami, but initial fears of another region-wide disaster faded as tsunami warnings were cancelled.

Indonesian and Australian authorities called off their tsunami alerts within two hours of the 7.8 magnitude tremor, though it was still unclear if the quake had destroyed any buildings or killed people in Sumatra.

A National Search and Rescue Agency official gave an initial report of some deaths, but later withdrew those comments.

"Up until now, there is no information about deaths," said Heronimus Guru, the agency's deputy head of operations. 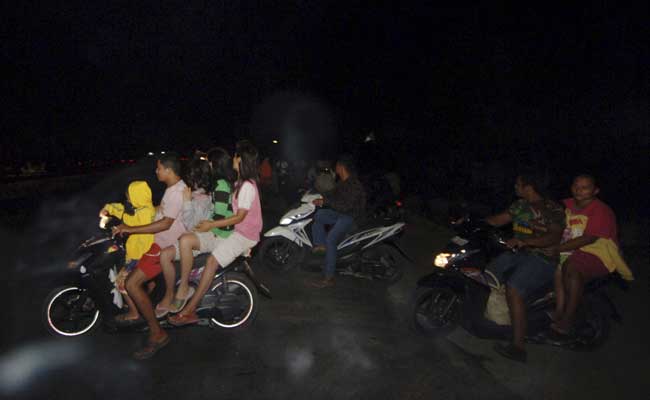 There is no information on any casualties yet from a major earthquake that struck off Indonesia's island of Sumatra. (Reuters Photo)

Any rescue operation will be hampered by the dark, which falls early in the tropical archipelago.

There were no immediate reports of damage, but the shallower a quake, the more dangerous it is. The US Geological Survey originally put the magnitude at 8.2, revising it down to 7.8.

"So far there have been no reports (of damage)," Andi Eka Sakya, head of the National Meteorological Agency, told TVOne. "In Bengkulu (in southwest Sumatra) they didn't feel it at all."

The National Disaster Mitigation Agency said a tsunami was unlikely.

"Local governments of the city of Padang and some other areas in west Sumatra have said there was no tsunami and the warning can now be revoked," spokesman Sutopo Purwo Nugroho said.

President Joko Widodo was staying overnight at a hotel in Medan in North Sumatra and was safe, palace officials said. A Medan resident said he did not feel the quake.

Erwin, a resident of Mentawai, a chain of islands off Sumatra, told Metro TV: "I am at the beach currently looking to see any tsunami sign with my flashlight. There's nothing. A few minutes have passed but nothing, but many people have already evacuated to higher places."

On Pagai, an island off the west coast of Sumatra, resident Jois Zaluchu told Reuters by phone that there were no reports of damage or casualties there.

But Kompas TV said patients at hospitals in Padang were being evacuated. A TVOne reporter said Padang residents were panicking and there were heavy traffic jams.

Indonesia, especially Aceh, was badly hit by the Indian Ocean tsunami in 2004.

A 9.15-magnitude quake opened a fault line deep beneath the ocean on Dec. 26, 2004, triggering a wave as high as 17.4 meters (57 feet) that crashed ashore in more than a dozen countries to wipe some communities off the map in seconds.

Indonesia straddles the so-called "Pacific Ring of Fire", a highly seismically active zone, where different plates on the earth's crust meet and create a large number of earthquakes and volcanoes.
© Thomson Reuters 2016