The Old Bailey court in London sentenced Sabrina Kouider, and Ouissem Medouni for the September 2017 killing of 21-year-old Sophie Lionnet. 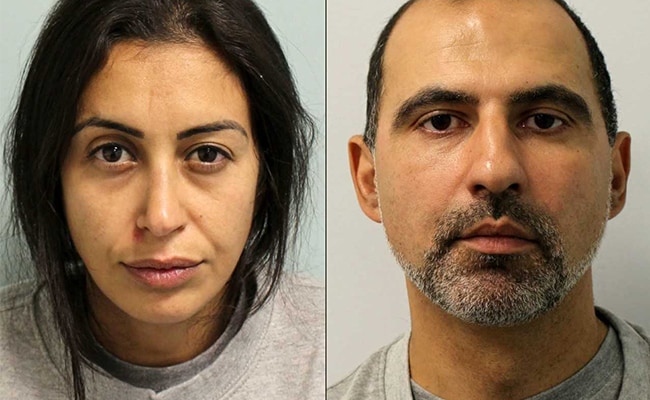 Both the accused had initially denied killing her, but admitted to burning her body. (AFP)

A French couple living in Britain who tortured and murdered their au pair and tried to dispose of the body in a back garden bonfire have been sentenced to life in prison with a minimum of 30 years.

The Old Bailey court in London sentenced Sabrina Kouider, who is undergoing psychiatric treatment, and Ouissem Medouni for the September 2017 killing of 21-year-old Sophie Lionnet, after a two-month trial ended on May 24 with their convictions.

"Sophie was a kind, gentle and good natured girl," said Judge Nicholas Hilliard. "The suffering and the torture you put her through before her death was prolonged and without pity."

He added: "I'm sure on all the evidence you were both involved."

The jury deliberated for a week before unanimously convicting Kouider and ruling by a majority decision of 10 to 2 that her partner Medouni was also guilty.

Both had denied murdering Lionnet, from Troyes in eastern France, although they had admitted to burning her body.

The court heard how the couple had interrogated and tortured Lionnet over their belief she was conspiring with one of Kouider's ex-boyfriends -- Mark Walton, a former member of Irish band Boyzone -- who they claimed sexually abused members of their family.

"She died as a result of purposeful and sustained violence, and not by accident," state prosecutor Aisling Hosein said when they were convicted.

"They were both jointly involved and came up with a plan to try and destroy her body and escape responsibility for this horrendous crime."

Kouider, who has two children, apologised to her victim in a letter read out in court Tuesday.

"I'm suffering every day thinking of you and what happened to you that dreadful night," she said.

"I only wish I could turn the clock back, it never happened and you would be alive with us today."

Icah Peart, Kouider's lawyer, said his client was suffering from an "overwhelming and obsesssional fear" over Walton and "everything she did was absolutely driven by delusional disorder".

Medouni's lawyer Orlando Pownall insisted Kouider had been the "dominant" party and his client was "indoctrinated".

The victim's mother called the duo "monsters" in a statement read in court last month.

Catherine Devallonne said she "fell into shock and was hospitalised" after police broke the news that her daughter, whom she described as a "reserved young girl", had been killed.

"I've been living this nightmare ever since," she added. "Those monsters beat her to death. They left her hungry. They took away her dignity and eventually her life".

Police described how Lionnet was subjected to a "series of 'interrogations'... over a 12-day period, in a bid to force Sophie to admit various false crimes they had accused her of."

Kouider, who admitted during the trial that she hit Lionnet "really bad" with an electrical cable, filmed some of the sessions. They had planned to hand them over to police as evidence of the au pair's guilt.

"We will never know the full extent of the horrors Sophie had to endure," said Scotland Yard detective Domenica Catino.

"Even in death, the torture, abuse and humiliation continued by placing her partially-clothed body into a suitcase with no regard for even a semblance of a burial.

"It was clear that together the couple made the decision to torture Sophie and then in a cowardly fashion blamed each other for her death," added the detective.

Neighbours alerted the authorities after noticing smoke and a "horrible" smell coming from the property.

Firefighter Thomas Hunt told the court that he confronted Medouni after he found human fingers and a nose as he put out the fire.

(Except for the headline, this story has not been edited by NDTV staff and is published from a syndicated feed.)
Comments
French Couple Murder Au PairLondonOld Bailey court in London