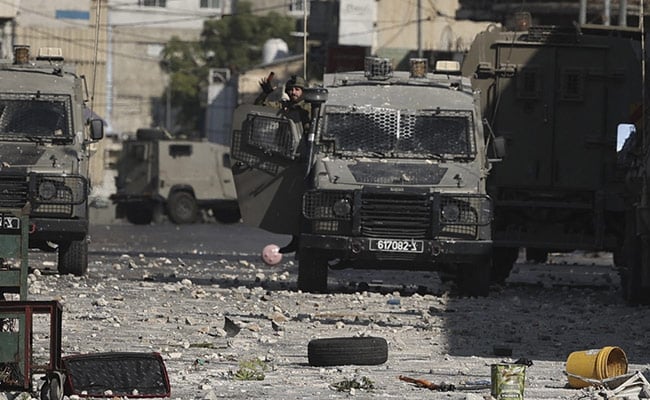 At least 40 Palestinians were wounded, four of them in serious condition.

Two Palestinians, including a senior militant commander, were killed Tuesday as Israeli forces raided a house in the occupied West Bank city of Nablus, the army said.

At least 40 Palestinians were wounded, four of them in serious condition, according to the Palestinian health ministry.

"The terrorist Ibrahim al-Nabulsi was killed in the city of Nablus," the Israeli army said in a statement, adding that "another terrorist who was staying in the house" also died.

Nabulsi was a commander of the Al-Aqsa Martyrs' Brigade, one of the main militant groups present in the West Bank operating under the ruling Fatah party.

Clashes with the Israeli army also broke out in other parts of Nablus, as Palestinians hurled stones at the troops.

Heavy gunfire was heard as dozens of Israeli military vehicles brought traffic in one of the West Bank's largest cities to a standstill.

"A violent clash developed with dozens of rioters who threw stones and threw explosives at the forces, who responded by means of crowd dispersal and shooting. Several injuries were confirmed," the army said.

"All the forces have left the city, there are no casualties to our forces," it added.

Israeli security forces have conducted near-daily operations in the West Bank in recent months, focusing on militants from the Islamic Jihad group.

At least 57 Palestinians have been killed since late March, mostly in the West Bank.

They have included suspected militants and also non-combatants, among them Al Jazeera journalist Shireen Abu Akleh, a Palestinian-American dual national, who was covering an Israeli raid in Jenin.

Attacks on Israeli targets have killed 19 people over the same period, most of them civilians killed in attacks inside Israel. Three Israeli Arab attackers have also been killed.

On Friday, Israel launched what it called a "pre-emptive" aerial and artillery bombardment of Islamic Jihad positions in the Gaza Strip, leading militants in the coastal enclave to fire more than a thousand rockets in retaliation, according to the army.

An Egypt-brokered ceasefire reached Sunday ended three days of intense fighting that killed 46 Palestinians, 16 of them children, and wounded 360, according to Gaza's health ministry.

Israel insists that some of children and other civilians counted in the Palestinian toll were killed by Islamic Jihad rockets that fell short or misfired.

Prime Minister Yair Lapid said Monday that the bombardment had "landed a devastating blow to the enemy", and that the "entire senior military command of Islamic Jihad in Gaza was successfully targeted."

Islamic Jihad said 12 of its members had been killed, including commanders Taysir al-Jabari and Khaled Mansour.

Mohammad al-Hindi, a senior member of the group, said the ceasefire deal "contains Egypt's commitment to work towards the release of two prisoners".

They were named as Bassem al-Saadi, a senior figure in the group's political wing who was arrested in the West Bank early last week, and Khalil Awawdeh, a militant also in Israeli detention.