In today's episode of NDTV's 'The Countdown', Prannoy Roy, Shekhar Gupta, Dorab R Sopariwala and NDTV's Kamal Khan talk about the caste angle in Uttar Pradesh politics and how the ordinary voter casts her franchise along these lines. The Yadavs and Jatavs support the SP and BSP alliance in the majority. However, the answer to this year's election lies in whether the BJP or the Congress can capitalise on the balance of the votes.

Here are the highlights for the third episode of 'The Countdown': 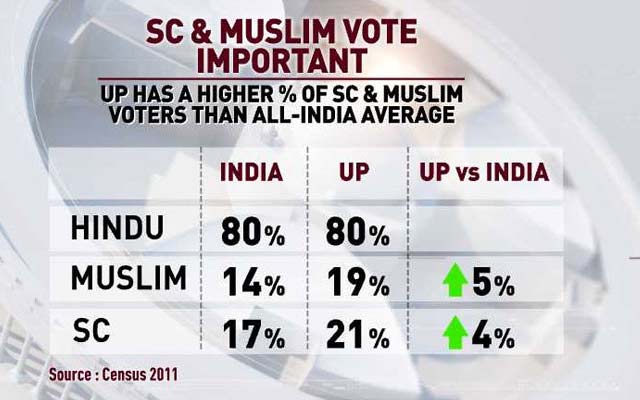 Let's take a look at the caste-wise and whether any alliance would, with Congress would damage the fortunes of the SP or BSP. Is that their big worry? 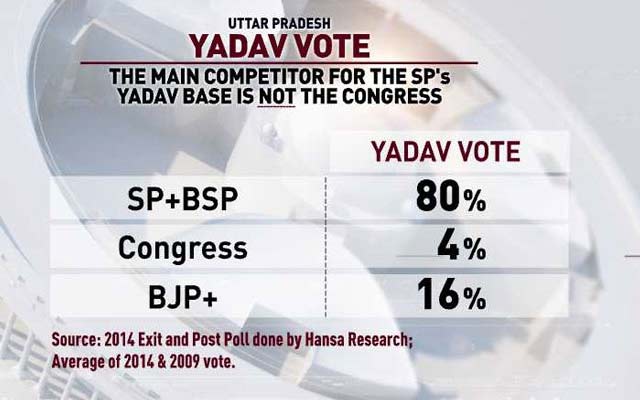 What about the Jatav vote? Is Mayawati worried of Congress eating into her vote?

Mayawati's competition for Jatav votes is BJP, not Congress 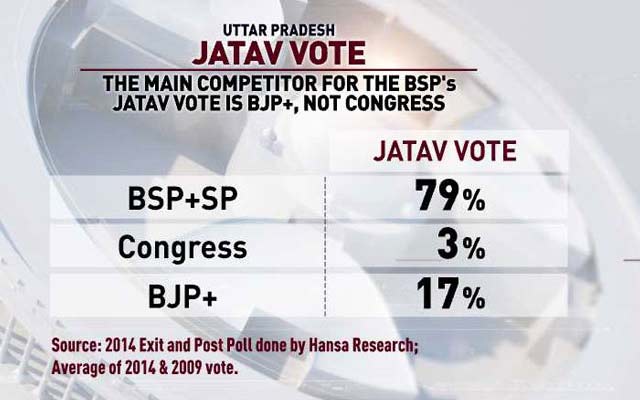 Let's have a look at the Brahmins. A lot of Congress leaders we met said we will take all the Brahmin vote from the BJP. But what's the fact? 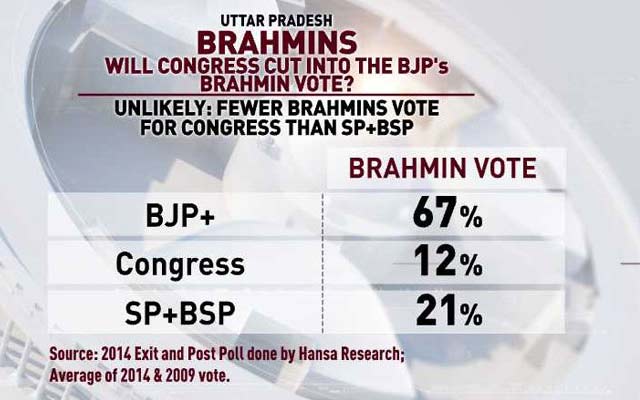 Prannoy Roy: It's unlikely because fewer Brahmins vote for Congress than for SP-BSP. The Brahmin vote, 67% goes for BJP, which is huge. The balance, SP-BSP gets 21% and Congress is 12%. It's not as though Congress will get most of the votes. It's not like they will cut the Brahmin vote from BJP. But they're nothing with the Brahmins.

Shekhar Gupta: Even more touching is the other fantasy of Congress, that they shouldn't align with BSP because we have common voter base. There is no common voter base anymore. Congress is living in the 70s.

NDTV's Kamal Khan: "Without an alliance, the perception is that in this polarised atmosphere, a big chunk of the Hindu vote is with the BJP. The smaller castes are with Mulayam Singh, Akhilesh Yadav & Mayawati. So who is forming your support base on the basis of which you feel you will perform well even without the alliance?"

Let me give you a figure. Chhattisgarh has 96% Hindus. There are about 92-93% Hindus in Madhya Pradesh. Both states were deep rooted bastions for the BJP. There were only 4% Muslims in Chhattisgarh, and 6% in Madhya Pradesh, with 9% in Rajasthan. There was a huge attempt at polarisation with some very dirty tactics used. They made every effort. But a very large section of society had made up its mind that the BJP tells lies, hasn't followed through on its many promises, and needs to be removed. So they were removed.

"In our book we have written a chapter on divide and rule, that my enemy's enemy is my biggest enemy. So, you much rather let the BJP win than tie up with somebody else. This is a way in which divide and rule is what's happening? They say you hang separately."

Akhilesh Yadav: "The BJP's divide and rule is of a different sort. The Congress may have done it too, but in the last election I saw, the PM claimed that he came from a backward community. And he took the backward vote. He has divided society & religion. It could be a strategy, so yes, the BJP does have a strategy, where even if one gets 1,000 votes, it is possible that they can be given money and they can be made to fight. This is the strategy of many political parties. But when we lost the UP polls, we lost by a margin of 2 lakh votes somewhere and 2.5 lakh votes elsewhere. When we get to know what our weaknesses are, we can learn how to defeat our opponents."

Prannoy Roy: The Jatavs are so focused on Mayawati and little bit on SP and Yadavs in reverse, that they shouldn't be worried about Congress as allied. So why are they worried?

NDTV's Kamal Khan: Their worry is that at national level, the Muslim vote can shift. They feel Congress will make the government at the centre. The 19-20% vote can shift to them, is what they fear.

Prannoy Roy: Let's look at figures of the Muslim vote. It will be divided if Congress doesn't join the SP-BSP. 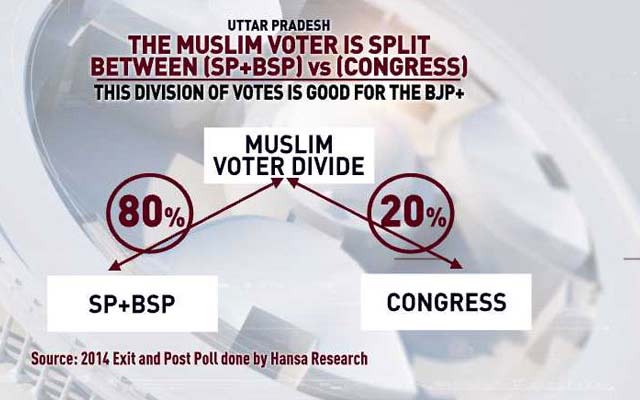 Shekhar Gupta: None to the BJP.

Prannoy Roy: Very, very few. Among the non-BJP, it's 80-20. There are a few independent candidates. But the divide is 80-20, which can make a big difference.

NDTV's Alok Pandey: Even in Barabanki, where you were. That's a seat where the Congress is known to be strong, because PL Punia has won an election there and he's known to be a strong candidate. His son is contesting this time around, so I'm sure he'll be campaigning. And then you'll likely have someone fighting from the SP. That's going to be an issue there as if they would've been together, they would've consolidated votes. And there is a significant Muslim population there. And if the votes are going to be 60-40, 80-20, there will be a problem.

We have not heard the sort of language from you that a handful of your leaders keep using. I don't need to name them, you know who they are. It sends out the wrong message. It creates a sense of victimhood in the Muslim community, a sense of alienation. They feel they are being targetted. The Muslim population would be about 20% in UP and 14-15% in all of India. Isn't there a responsibility to practice inclusive politics, for the top leaders to stop such irresponsible speech from within the party? To act against them? Because you speak of progress for everyone. We have never heard you say inflammatory things.

Uttar Pradesh Deputy Chief Minister Dinesh Sharma: I do not know who you are referring to, but I can say this - the way Modiji has worked, the Muslims in Varanasi vote for him. In Lucknow, a sizeable population of Muslims vote for Rajnath Singh. Chief Minister Yogi Adityanath himself has a lot of Muslims visiting his ashram every day and voting for him as well. What is said by whom, when, where & in what context, depends on an individual's personality. The scenario for us, in the country & the state, is that we believe in progress & support for everyone. It is an issue the PM believes in, there should be no discrimination, no differences. We are modernising madrasas as well. Instead of reducing funds for the upliftment of minority communities, we have increased it one and a half times. If we were a party that created differences, we would have never done that.

Prannoy Roy: But, not even one MP is Muslim, not one MLA in Gujarat is Muslim. At least to show inclusiveness, will there be any MPs from UP who will be Muslim?

Dinesh Sharma: I think that process is going stronger. There is conversation between educated Muslims. Look at Godhra, Surat. Lots of Muslims still support BJP. Because they know BJP will not discriminate. What I am trying to say is that BJP does not give tickets according to caste or religion. We are a political party. BSP-SP try to divide the voters. Those numbers are rising within the BJP. Top leadership among Muslims is with BJP. Christian and Muslim leaderships are now supporting the BJP.

"BJP's divide and rule is of a different sort": Samajwadi Party chief Akhilesh Yadav to NDTV 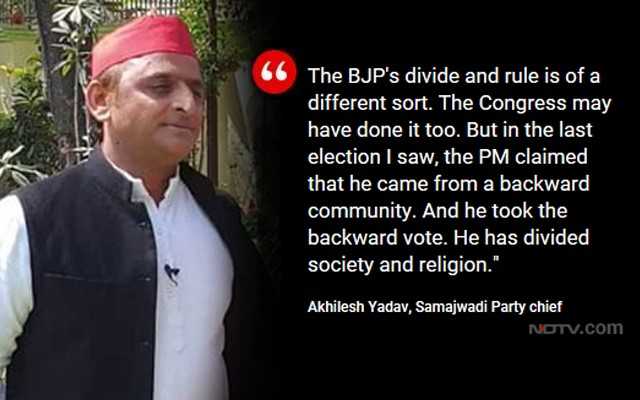 "When we know our weaknesses, we can learn how to defeat our opponents": Samajwadi Party chief Akhilesh Yadav 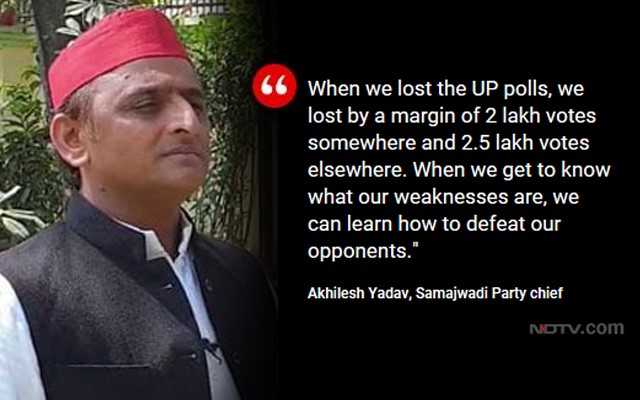 Top News Of The Day: Race To Billionth Vaccine Dose Picks Up Pace