Officers of Cyberabad Police Commissionerate submitted all details to the NHRC team, which is probing the December 6 'encounter', in which the police gunned down all the four accused at Chatanpally near Shadnagar town. 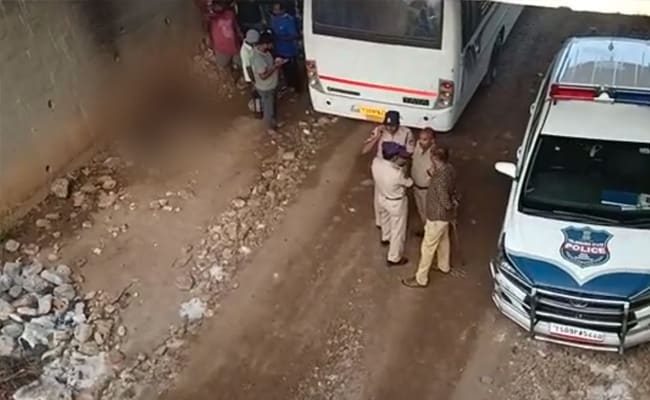 Telangana police presented before the NHRC panel the serviceman of the petrol bunk, witness in the case.

The Telangana Police on Tuesday submitted its report to the National Human Rights Commission (NHRC) on the killing of all four accused in the gang-rape and murder of a veterinarian on the outskirts of Hyderabad.

Officers of Cyberabad Police Commissionerate submitted all details to the NHRC team, which is probing the December 6 'encounter', in which the police gunned down all the four accused at Chatanpally near Shadnagar town.

The police submitted all the details of the investigations conducted by them into the rape and murder of the 26-year-old near Shamshabad on the outskirts of Hyderabad, the setting ablaze of the victim's body near Shadnagar town on the intervening night of November 27 and 28, subsequent arrest of the four accused, their interrogation and the alleged 'encounter'.

A seven-member NHRC team continued its investigation into the 'encounter' for a fourth consecutive day on Tuesday. It conducted the hearing at Telangana Police Academy here.

Cyberabad Police, along with its report, is understood to have submitted to the NHRC panel the records related to the DNA tests of the victim and the accused, forensic evidence and other evidence such as CCTV footage of the truck near the scene of the crime and the accused buying petrol at a petrol bunk. The police also presented before the NHRC panel the serviceman of the petrol bunk, who is a witness in the case.

NHRC, which began its probe on December 7, has so far examined family members of all four slain accused and the victim. It already visited the crime scenes and the government-run hospital in Mahabubnagar, where the bodies of the accused were kept.

On Monday, the bodies were shifted to Gandhi Hospital in Hyderabad on the direction of Telangana High Court. Hearing a couple of petitions seeking thorough probe into the 'extra-judicial' killings by the police, the court directed authorities to preserve the bodies till December 13.

(Except for the headline, this story has not been edited by NDTV staff and is published from a syndicated feed.)
Comments
Telangana PoliceNational Human Rights Commissionhyderabad encounter