In the video, guests at the wedding were seen getting embroiled in an ugly fight as they threw chairs on each other inside a makeshift tent. 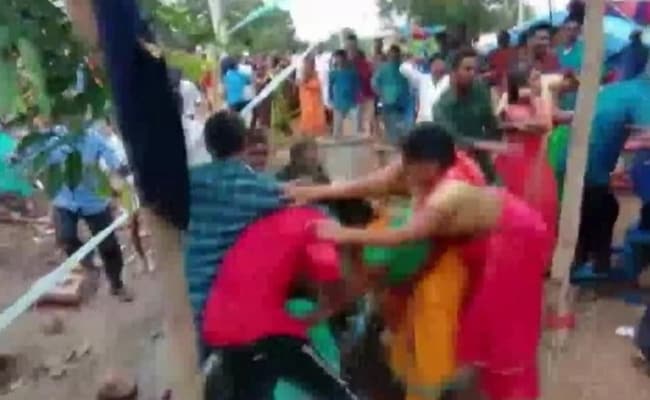 Wedding celebrations in Telangana's Suryapet district turned ugly after a fight broke out between the bride and the groom's family members.

During the scuffle, three received minor injuries and were later taken to a local hospital nearby.

Shiva Ram Reddy, Circle Inspector, Kodad Rural Police Station told ANI over the phone, "In October, the wedding was fixed between Ajay from Kodad Mandal of Suryapet district and Indraja from Prakasam district in Andhra Pradesh. The marriage took place on October 29. On the same day, during the celebrations, a heated argument took place between the bride and groom's family members over taking out marriage procession in the village. The argument turned into a fight and both the parties attacked each other with chairs."

He continued, "Immediately after receiving the information we reached the spot and noticed that three persons received minor injuries from both sides. They were shifted to a local hospital for treatment and we asked them to lodge a complaint with the police. On Friday they came to the police station and said the couple are having no issues and are living together and they said they don't want to register a complaint because they sorted the issue themselves."

In the video, guests at the wedding were seen getting embroiled in an ugly fight as they threw chairs on each other inside a makeshift tent.