First Invite to Sasikala, Assures Governor, But After Diligence: Sources 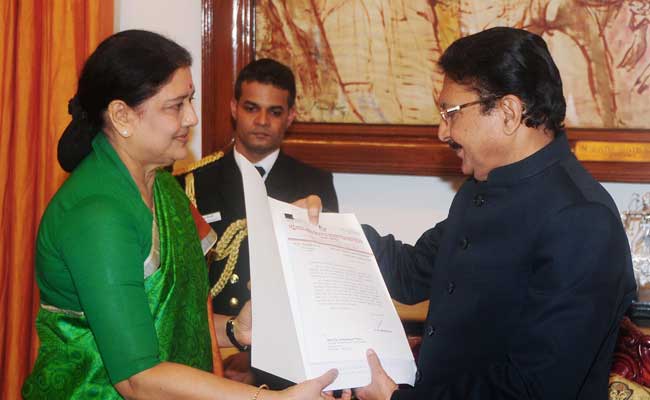 VK Sasikala met the Governor on Thursday, claiming support in writing of all of 134 AIADMK legislators

Chennai: At his 15-minute meeting with Governor C Vidyasagar Rao on Thursday evening, O Panneerselvam asked for five days to gather support of AIADMK legislators, who, he has alleged, are being held "captive" by the camp led by VK Sasikala, the close companion of former Tamil Nadu chief minister J Jayalalithaa who now heads the ruling party. Mr Panneerselvam, who holds charge as interim chief minister after his resignation was accepted earlier this week, has requested the Governor to ask him, instead of VK Sasikala to prove majority in the state assembly.

But, sources said, Governor Rao has assured Ms Sasikala that she will get the first invitation to form government, though he needs time to address the objections raised by Mr Panneerselvam.

Ms Sasikala and 10 top ministers met the governor about two hours after Mr Panneerselvam did and challenged his claims, saying it has support in writing of all of the AIADMK's 134 legislators, including Mr Panneerselvam, and so must be invited to form government. Mr Panneerselvam, who now says that he was forced to resign at a party meeting last Sunday, also alleges that legislators were made to sign blank sheets of paper which are now being used by Ms Sasikala to stake claim to be Tamil Nadu's next chief minister. Some signatures, he has alleged, were forged.

Sources said Governor Rao wants the signatures that Ms Sasikala has submitted as proof of support in her party to be authenticated.

"Many signatures in Sasikala's list are forged...O Panneerselvam told the Governor that he was forced to resign and that many legislators are being held in captivity in unknown locations," said Dr V Maitreyan, one of the senior AIADMK leaders backing Mr Panneerselvam. He was referring to about 130 legislators who haven't been seen or heard after they were bused by Ms Sasikala on Wednesday to hotels and resorts in and around Chennai to prevent them from being poached by Mr Panneerselvam.

"We are the real AIADMK," Dr Maitreyan, a Rajya Sabha member added, pointing out that two key party officials - E Madhusudhanan, the AIADMK's number 2 as its presidium chairman and Mr Panneerselvam as treasurer - are on one side. Mr Panneerselvam has called his removal as party treasurer by Ms Sasikala illegal.

"Justice will prevail," Mr Panneerselvam said after his meeting with the governor, assuring supporters that "good things will happen."

Promoted
Listen to the latest songs, only on JioSaavn.com
Mr Panneerselvam's claim still does not carry the weight of numbers. At their meeting with the Governor, Ms Sasikala and co conceded that five legislators may not be with them, but said even those currently supporting Mr Panneerselvam could cross back, since they  have withdrawn their signatures of support. They offered to produce at least 129 legislators en masse before the Governor to prove their support. Governor Rao reportedly told them that would not be necessary.

The AIADMK has 134 legislators in the 235-member Tamil Nadu assembly. Either side will need to prove the support of 118 to form the next government.