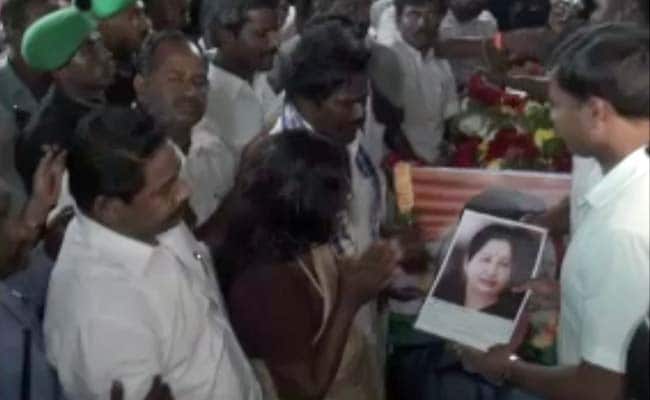 Minister Sellur Raju produced a picture of Chief Minister J Jayalalithaa and held it against the coffin.

Chennai: Politics found its way to the funeral of a Siachen martyr in Tamil Nadu as a minister seized the chance to promote Chief Minister J Jayalalithaa.

The funeral of Sepoy G Ganesan, who was among the soldiers who died in an avalanche in Siachen, was held in Madurai on Tuesday morning.

The minister came to hand over a cheque of Rs 10 lakh on behalf of his government, but he wanted to leave no doubts about who should get the credit.

So Mr Raju produced a picture of the Chief Minister and held it against the coffin. He then gestured to the soldier's weeping mother to take a look at the person who had granted the money. The shattered mother folded her hands in gratitude.

The exchange outraged many in the crowd. "It is a shameful and insensitive act front of the martyr's coffin," said Prem, a local resident.

The minister and the collector were not available for comments.
Tamil Nadu will go to polls later this year and members of the ruling AIADMK are aiming for maximum visibility for the Chief Minister.

The party drew severe criticism last year when during the floods, volunteers complained that AIADMK men had stamped Jayalalithaa stickers on relief material sent by the people and non-profits.

Last week, AIADMK activists organized a mass wedding to celebrate Ms Jayalalithaa's 68th birthday. Newly-wed couples soon learnt the catch - they would have to wear headbands with stickers of the Chief Minister.