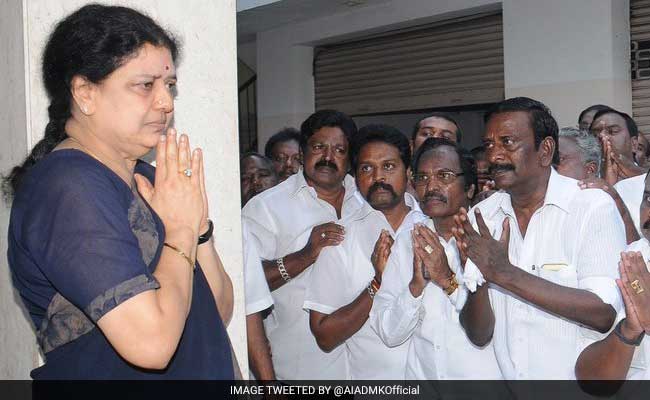 Days after the death of Jayalalithaa, top AIADMK leaders, including Chief Minister O Panneerselvam and Lok Sabha Deputy Speaker M Thambidurai had urged Sasikala to become the party General Secretary, a post held by Jayalalithaa all her life.

Jayalalithaa Peravai, a wing of the ruling AIADMK, had earlier in the day passed a resolution urging Sasikala Natarajan to become both party general secretary and Chief Minister by contesting from RK Nagar constituency in Chennai, which was represented by late Jayalalithaa.

Peravai Secretary R B Udhayakumar who is also the Tamil Nadu Revenue Minister, handed over the resolution titled "Thai Thanta Varam," (Sasikala is a boon granted by Amma) to Ms Natarajan, urging her to take the responsibilities of both the party and the government.

"Besides guarding AIADMK, Chinnamma should fight the RK Nagar bypoll (now vacant due to the death of Jayalalithaa) and assume responsibility as Chief Minister, and lead the Amma's government," Mr Udhayakumar told reporters.

Information Minister Kadambur Raju and Endowments Minister Sevoor S Ramachandran, who are also Peravai functionaries, were among 50 Peravai members who called on Ms Natarajan, along with Udhaya Kumar.

He said "we requested Chinnamma to guard 1.5 crore AIADMK workers by becoming the party General Secretary and the over seven crore people of Tamil Nadu by becoming Chief Minister."

Mr Radhakrishan said a resolution passed in this regard was handed over to Ms Natarajan.

Man In Debt Murders Family, Kills Self; Blames Lottery Addiction For It