Lava Flowing On Mars May Be The Result Of Mud-Volcanoes, Suggests Study

The results add important details to the existing knowledge of Mars and its history, which has been shaped by volcanic activity. 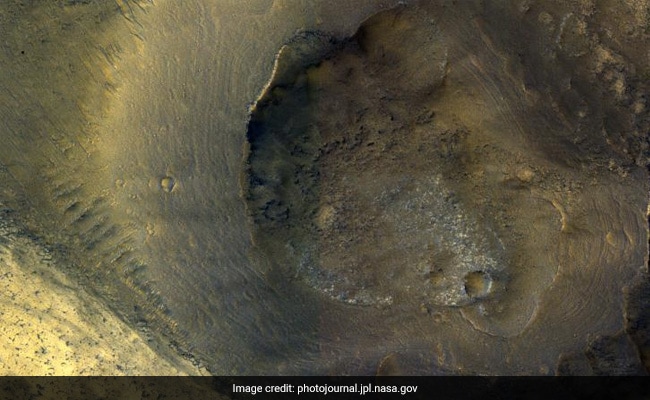 Scientists have long suspected that the ''fire-breathing'' volcanoes that spread large quantities of flowing lava over Mars were not the only kind. The numerous mountain cones in the northern hemisphere of the Red Planet may be the result of mud volcanoes.

However, until now, researchers have lacked knowledge about the behaviour of water-rich mud on the surface of Mars.

The results, which have now been published in the journal Nature Geoscience, add important details to the existing knowledge of Mars and its history, which has been shaped by volcanic activity.

"We have long been aware that in the early history of Mars, several billion years ago, large amounts of water were released over a short period of time, eroding very large valleys in the landscape, which have long since dried up," explains Ernst Hauber of the DLR Institute of Planetary Research in Berlin-Adlershof, who was involved in the study.

"Extensively eroded masses of fragmented rock were transported through these outflow channels and into the northern lowlands of the planet, where they were quickly deposited. Later, these rocky masses were covered by younger sediments and volcanic rocks," Hauber says.

Some Mars researchers had previously suspected that these underground, water-rich sediments could have become liquefied under certain circumstances and been pushed back up to the surface under pressure. In reference to the similar rise of magma, this process, which is well documented in many sedimentary basins on Earth, is referred to as sedimentary volcanism or mud volcanism.

Are small volcanic cones the result of mud extrusions?

Tens of thousands of conical hills populate the northern highlands of Mars, often with a small crater at their summit. These may be the result of mud volcanism. However, the evidence for this is not easy to acquire. This is due to the fact that little is known about the behaviour of low-viscosity mud under the environmental conditions on the Martian surface.

To fill this knowledge gap, a group of European scientists carried out a series of experiments in a cylindrical low-pressure vessel 90 centimetres in diameter and 1.8 metres long, in which water-rich mud was poured over a cold sandy surface. Apart from the gravity on Mars, which could not be simulated, this experimental setup was somewhat reminiscent of building a large sandcastle under Mars-like conditions.

How does watery-mud move on Mars?

Exploration of Mars has revealed the presence of large outflow channels which have been interpreted as the products of catastrophic flood events during which a large quantity of water was released from the subsurface. The rapid burial of water-rich sediments following such flooding may have promoted an ideal setting to trigger sedimentary volcanism, in which mixtures of rock fragments and water erupt to the surface in the form of mud.

The aim of these unusual experiments was to find out how the changed physical parameters influence the water component of the mud and thus alter its flow behaviour. The results came as a surprise.

"Under the low atmospheric pressure of Mars, the mud flows behave in much the same way as ''pahoehoe'', or ''ropy'', lava, which is familiar from large volcanoes on Hawaii and Iceland," says the lead author of the study, Petr Broz of the Czech Academy of Sciences.

These findings were somewhat unexpected, as comparable geological processes on other bodies in the Solar System are thought to occur in a similar way to conventional volcanic processes on Earth.

"Our experiments show that even a process as apparently simple as the flow of mud - something that many of us have experienced for ourselves since we were children - would be very different on Mars," Broz adds.

Water that flowed over the surface of Mars billions of years ago transported large quantities of sediments to the northern lowlands, where they were later covered by younger sediments and volcanic rocks. Some Mars researchers suspect that these water-rich sediments became liquefied underground and rose back to the surface under pressure -- similar to the hot ''mud spring'' at Bakhar in Azerbaijan (diameter approximately 1.5 metres).

Experiments in a low-pressure chamber, in which DLR scientist Ernst Hauber was involved, have now shown that the flow behaviour is similar to that of what is referred to as ''ropy lava'' (or, according to the Hawaiian term for smooth, unbroken lava, also known as '' pahoehoe'' lava), which is at a temperature of several hundred degrees Celsius.

This implies that mud flows on Mars take a completely different course than those on Earth. This observation could support the assumption that many of the conical hills with central craters discovered in the north of Mars are also mud volcanoes.

The key reason for the flow behaviour of the mud is the very thin atmosphere of Mars. The pressure is 150 times lower than the pressure at sea level on Earth. This difference has a major impact. Under such conditions, liquid water on the Martian surface is not stable and begins to boil and evaporate. This process absorbs latent heat in the vapor and cools the remaining mud, which then freezes at its surface, forming a crust.

In a phase transition, such as during a freezing or thawing process, latent heat is released or absorbed by a material without changing its temperature.

"Of course, we already know that liquid water begins to boil sooner under low pressure - that is why, for example, it takes longer to cook pasta on a camping stove on high mountains on Earth," explains Hauber.

"However, the impact of this familiar effect on mud has never been investigated in an experiment before. Once again, it turns out that different physical conditions must always be taken into account when looking at apparently simple surface features on other planets. We now know that we need to consider both mud and lava when analysing certain flow phenomena," adds Hauber.

The team of researchers were able to show in detail that the mud flows in the experiment behaved like pahoehoe lava, with liquid mud spilling from ruptures in the frozen crust, and then refreezing to form a new flow lobe. When mud escapes onto the Martian surface, it is able to flow for some time before it solidifies due to the low temperatures.

However, the morphology -- the shape of the mud flows -- is different from those found on Earth. The research work that is currently being carried out is important for investigations of other planetary bodies, because similar processes may also play a role in cryovolcanic eruptions, in which liquid water comes to the surface, instead of magma or mud, such as on icy moons in the outer Solar System.