Saplings Distributed To 20,000 Pune Students In An Attempt To Set Record

The event was organised near the Savitri Phule Pune University. Students wore tri-colour T-shirts during the event and formed the National Flag. 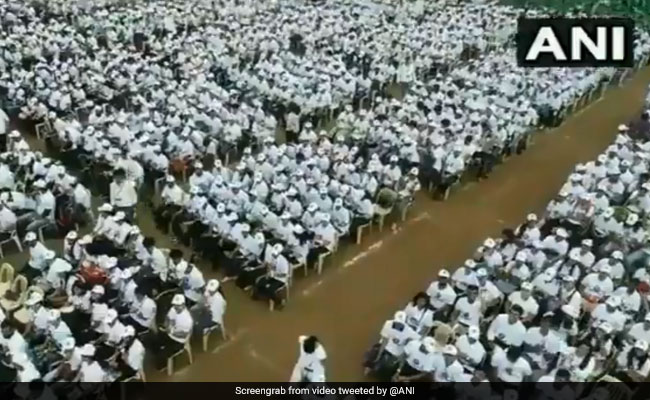 Twenty thousand students were distributed saplings at Savitri Phule Pune University (SPPU) on Sunday in an attempt to set a Guinness World Record for the "largest distribution of saplings".

Maharashtra Chief Minister Devendra Fadnavis was the chief guest. Along with him, Pune Guardian Minister Chandrakant Patil was present at the event.

The event was organised at a playground near the university. Students wore tri-colour T-shirts and cap during the event and formed the National Flag.

The theme of this year's World Environment Day was "air pollution".

#WATCH Pune: Over 15,000 students of Savitribai Phule Pune University were distributed with saplings yesterday as the university attempted Guinness World Record for the "largest distribution of saplings". #Maharashtrapic.twitter.com/X4bnwoIJ2m

On this occasion, Prime Minister Narendra Modi had urged people to plant more saplings for a better tomorrow. He also asked them to find ways to make the planet cleaner and greener. World Environment Day was on June 5.

Government has launched a "selfie with sapling" initiative to encourage tree plantation. Union Minister Prakash Javadekar had urged people to plant saplings on the World Environment Day, click selfies with it and post it on social media sites with hashtag #selfiewithsapling.