With the NCP hit by multiple desertions ahead of the Maharashtra polls, Sharad Pawar assumed charge of the campaign and traversed the state. His efforts paid off, with the party winning 54 seats, 13 more than its 2014 tally in the 288-member House. 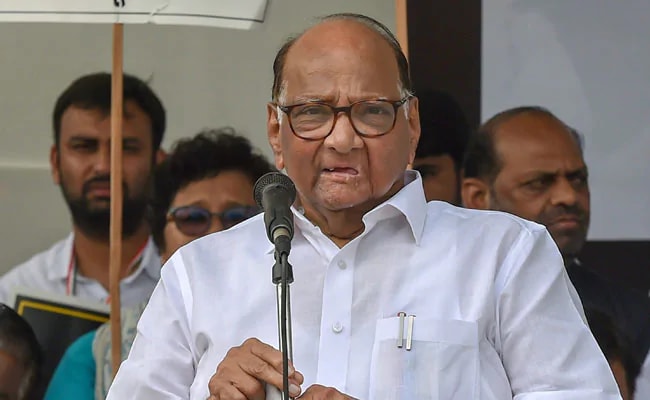 When Sharad Pawar addressed a rain-soaked rally in Maharashtra's Satara during campaigning for the October 21 Assembly polls, few thought that the 79-year-old would be the driving force behind the new government.

With the Shiv Sena-NCP-Congress all set to assume power in Maharashtra, the patriarch of this unlikely anti-BJP combine is the one left smiling, having outwitted stalwarts from the BJP camp.

Having brought his party out of a virtual existential crisis ahead of the Assembly polls, Mr Pawar's efforts suffered a setback, albeit momentarily, when nephew Ajit Pawar shocked him by aligning with the BJP to form the government.

With the NCP hit by multiple desertions ahead of the Maharashtra polls, Sharad Pawar assumed charge of the campaign and traversed the state. His efforts paid off, with the party winning 54 seats, 13 more than its 2014 tally in the 288-member House.

A dauntless Mr Pawar was instrumental in stitching the unlikely alliance with rival Shiv Sena to form a government in the state to keep the BJP away from power.

Mr Pawar has been a defence minister, opposition leader in the Lok Sabha and three-time Maharashtra chief minister in a career spanning 52 years in electoral politics.

He was a member of Maharashtra Legislative Assembly and the Lok Sabha for seven times each.

At 27 he was already a legislator in the Maharashtra Assembly, and at 38 he managed to pull down the Congress government in the state.

Mr Pawar shot to fame in 1978 when he dislodged the then Vasantdada Patil dispensation in the state to form a government with the Janata Party. He was only 38 at the time and is Maharashtra's youngest chief minister till date.

He parted ways with the Congress in 1999 over party president Sonia Gandhi's foreign origin issue and formed the NCP the same year. The Congress and NCP came together after the 1999 Assembly election in Maharashtra to form government in the state.

Mr Pawar became Agriculture minister in the Manmohan Singh government 2004 and served in that capacity over the next 10 years.

A powerful minister in the Manmohan Singh government, he derives much power from his sugar-exporting constituency in Pune district.

He is one of the few politicians to enjoy support from parties across regions and ideologies.

Often accused by his rivals of encouraging dynastic politics, Mr Pawar's daughter Supriya Sule is a three-time MP from Baramati, the NCP's stronghold.

Mr Pawar's grandnephew Rohit got elected from the Karjat-Jamkhed seat.

Apart from politics, Mr Pawar has been associated with cricket bodies including the International Cricket Council and Maharashtra State Wrestling Association.