Ice Volcanoes Erupt On Lake Michigan. Why You Shouldn't Go Near One

A video of erupting ice volcanoes is being widely shared online. 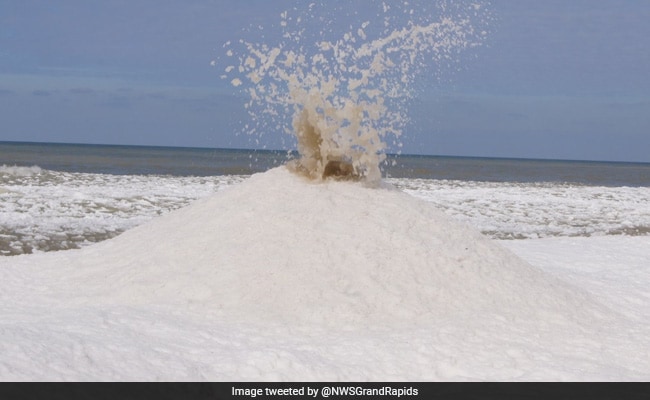 Photos and videos of ice volcanoes at Lake Michigan are viral.

A cold snap has brought an interesting phenomena to USA's Lake Michigan, creating ice volcanoes on its beachfront. A video of the ice volcanoes has created a huge buzz on social media.

The National Weather Service Grand Rapids office in the US posted a photo of ice volcanoes on Twitter with the caption: "It was a great day to visit the beach and watch the waves interact with the ice.

"You never know what you'll find at the lake until you go out there. Today it was volcanoes."

It was a great day to visit the beach and watch the waves interact with the ice. Here's a couple "ice volcanoes" erupting at Oval Beach on Sunday, February 16, 2020. #miwx#wmiwxpic.twitter.com/B0Vkl18RrN

On Facebook, the US National Weather Service also shared a video of the ice volcanoes erupting:

An ice volcano is a cone-shaped mound of ice formed over a lake by the eruption of water and slush through an ice shelf. Meteorologist Tom Niziol explained in a Facebook post why ice volcanoes form, writing: "They form as water is pushed under the ice sheet and as the pressure builds up the water shoots out through holes in the ice. If it's very cold, then that spray freezes up eventually building a cone."

He also warned people to stay away from these ice volcanoes. "They can be very dangerous to climb on however because they are hollow and built over that hole in the ice. Don't ever go venturing out onto them," Mr Niziol wrote.

A user wrote, "Wow... I've never seen anything like this...wonderful."

Another wrote: "Probably the most fascinating winter phenomena on the Great Lakes, besides lake-effect snow."

"What's going on in the picture? Are the ice-volcanoes just a result of perspective from the water hitting the ice, or are they actually little mini-volcanoes made of ice?" asked one user.

Man Opens 25-Year-Old Can Of Pasta. Brave Enough To See What Is Inside?