"The third time it bit me, I could actually feel the tooth on my bone because there's no skin there." 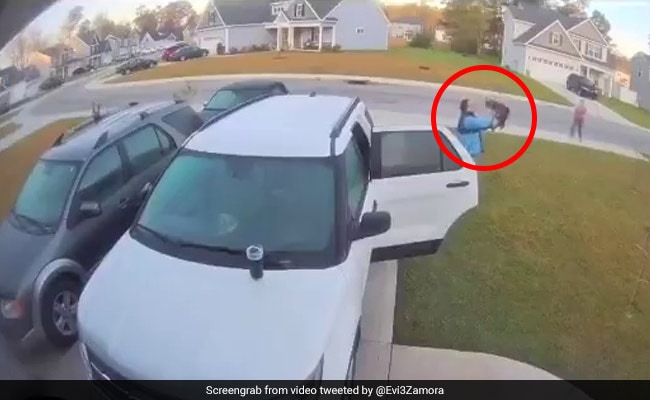 Happy Wade was filmed fighting off a rabid bobcat.

A dramatic video of a man hurling a bobcat to the ground has been viewed more than 12 million times on Twitter, where it was shared on Friday. Footage captured outside Happy and Kristi Wade's house in North Carolina shows the bobcat attacking Kristi, who can be heard screaming. "Oh my god. Run, Happy, run," she yells. Hearing her screams, her husband runs over to her and grabs the bobcat. He then hurls it to the ground, but the animal gets up and darts towards the woman again.

Happy Wade can then be seen chasing the animal, shouting expletives. The incident unfolded on the couple's front driveway.

"I kind of shoved my arm in there, that's why I ended up with it face-to-face," Happy told ABC11. "It's not really until I get it a few steps away that I look at it and I realize it's a bobcat and I say, 'Oh my god, it's a bobcat.'"

During the incident, he was bitten multiple times by the bobcat, which Pender County Sheriff's Office confirmed tested positive for rabies.

"The third time it bit me, I could actually feel the tooth on my bone because there's no skin there," Happy said. "And that's when I realized and that's when I flung it."

Footage of the incident has gone viral with 12 million views and hundreds of stunned reactions. You can watch the video here. (Disclaimer: Viewer discretion advised. Video contains language that is not suitable for children.)

Happy Wade said he recognised the bobcat was rabid by the way it was acting - running back towards the house instead of running away. "I knew because of the way it acted that this is not normal behavior for a bobcat," he said. "Only a bobcat that was rabid would do this."

According to WWAY, he shot the rabid bobcat even as his neighbours called 911, USA's emergency helpline. The Wades are concealed carry permit holders.

The couple is now being treated for rabies.