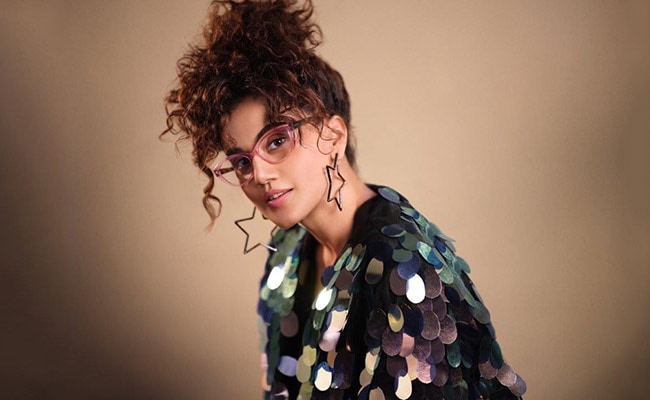 As Taapsee Pannu turned a year older on Sunday, several fans and members of the film industry took to social media to extend their birthday greetings to the Badla actor. Among them was Harshvardhan Rane, who shared screen space with Taapsee in her latest film HaseenDillruba - but Harshvardhan's birthday post for his co-star had an unexpected twist. The 37-year-old actor referred to Taapsee as "Elon Musk" in his birthday message, much to the bemusement of fans who were left scratching their heads at this unlikely nickname.

"Happy birthday dear Elon Musk," wrote Harshvardhan Rane, tagging Taapsee Pannu and adding a rocket emoji to his tweet. He shared a picture from HaseenDillruba which had become a viral meme soon after the film's release on July 2.

Taapsee Pannu responded to the birthday message, saying that it was a lot of "pressure" to be compared to the SpaceX and Tesla founder. "Ufff bada pressure hai! (it's a lot of pressure) Elon should also appreciate it someday," she wrote.

Her response, shared a few hours ago, has racked up hundreds of 'likes' and several comments on the microblogging platform - with some people tagging the SpaceX founder and others saying that Elon Musk should be "proud" of his association with Taapsee Pannu.

It is unclear how Taapsee came to be nicknamed after the billionaire, but the earliest mention we can find of it on social media is when she referred to herself as "Chota Elon Musk (Little Elon Musk)" last month.

On July 3, Harshvardhan Rane shared an "appreciation post" for Taapsee Pannu, retweeting a collage of the actress's stills from nine recent films. The last one in these includes a still from her 2019 hit Mission Mangal, based on the story of scientists at Indian Space Research Organisation who contributed to the Mars Orbiter Mission, which marked India's first interplanetary expedition. It is interesting to note the Mars connection between the actress and the business tycoon - Elon Musk has famously said he wants to build a city on Mars and make humanity a "multiplanetary species".

In her tweet, Taapsee thanked Harshvardhan for the appreciation post but added, "Unfortunately my costume stylist deserves more recognition than me for all these apparently ! I'm gonna continue being the 'chota Elon Musk'."

Thanks Harsh. Unfortunately my costume stylist deserves more recognition than me for all these apparently ! I'm gonna continue being the ‘chota Elon Musk' ???????????? https://t.co/wpcZM7Hxw8

On July 17, the two actors again used nicknames to refer to each other on Twitter. "Thank you so much my Neel / Harsh (desi Pamela)," Taapsee wrote for Harshvardhan.

"Most welcome humari Elon Musk (most welcome, our Elon Musk)," he wrote.

Taapsee Pannu is currently shooting for her maiden production film Blurr. Co-written by Pawan Sony and Ajay Bahl, the movie is being helmed by Bahl who has directed films like Section 375 and BA Pass.