"The video shows a baby gray whale being curious," said the lucky whale-watcher. 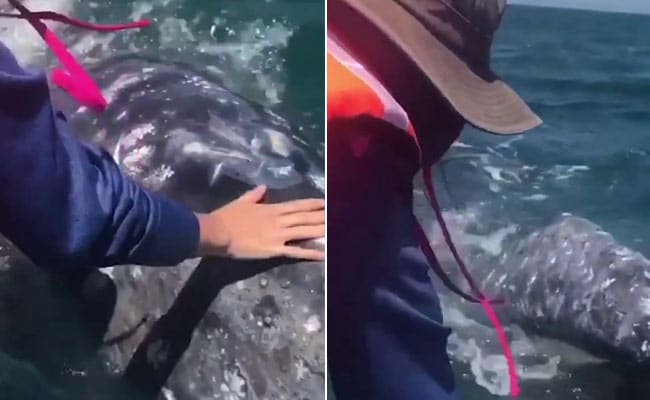 A tourist pets a baby gray whale in Baja, California.

A lucky whale-watcher in California got the rare opportunity to pet a baby whale when one swam right up to her boat. The once-in-a-lifetime interaction was recently captured on camera during a whale watching tour in Baja, California.

Sofia Sandoval Isaac of Guadalajara, Mexico filmed the moment an inquisitive baby gray whale swam up to her boat to say hello. Another person on the boat is seen splashing water, apparently in a bid to encourage it to come closer. The video shows Ms Isaac reaching down to pet the playful whale calf, who remained under the watchful eye of its mother throughout the interaction.

"The video shows a baby gray whale being curious," said Ms Isaac, according to Daily Mail. "Yes you are able to touch them here at the nursery in Ojo de Liebre."

She added that the gray whale calf's mother was behind it the entire time. "The mother whale was behind the baby at all times protecting him. This is my meaning of happiness and enjoying the present."

According to a National Geographic report, the perception of gray whales as aggressive killers changed in the 1970s, when one curious whale approached a group of fishermen and stuck its head out of water. Today, many gray whales teach their calves to interact with people - even actively encouraging the youngsters to approach small boats.