This Photograph In The Background Of Rahul Gandhi's Video Was Taken By....

"I love the photograph at the back!" wrote architect Seetu Mahajan Kohli 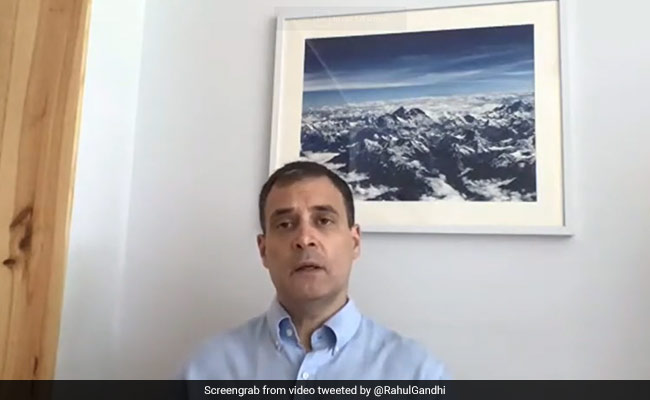 Congress MP Rahul Gandhi criticised Prime Minister Narendra Modi's government for its handling of the pandemic in a video released Tuesday. Mr Gandhi, 51, appeared over a video conferencing link as he released a white paper to help the government prepare for a third Covid wave, but it was a photograph in the background of his video that caught the eye of some people on Twitter. The framed photograph in question shows a snow-covered landscape against a blue sky.

"I love the photograph at the back ! It's gorg. Is it yours @raihanrvadra?" asked architect Seetu Mahajan Kohli, tagging Mr Gandhi's nephew, Raihan Rajiv Vadra.

Responding to the query, Raihan Vadra confirmed that he was the photographer.

Ms Kohli further praised the shot as "stunning". "You are my fav photographer already.. They add so much life to my interiors!" she wrote on the microblogging platform.

The 20-year-old responded with a word of thanks and added, "Glad you like the work", along with smiley face emojis.

Raihan Rajiv Vadra is the son of Rahul Gandhi's sister, Priyanka Gandhi Vadra, and her husband Robert Vadra. The 20-year-old is a budding photographer who runs an active photography page on Instagram, regularly sharing his photos with his 8,000-plus followers.

The photograph seen in the background of Mr Gandhi's video appears to be a shot of Mount Everest that Mr Vadra had shared on Instagram back in February. "On Top of The World! Mt. Everest from the sky!" he had captioned the photograph.

Last year, he had also shared a series of striking photographs taken during his trip to Rajasthan's Ranthambore National Park.