"All these years and after hundreds of pomogranate later I see this..." wrote one Twitter user 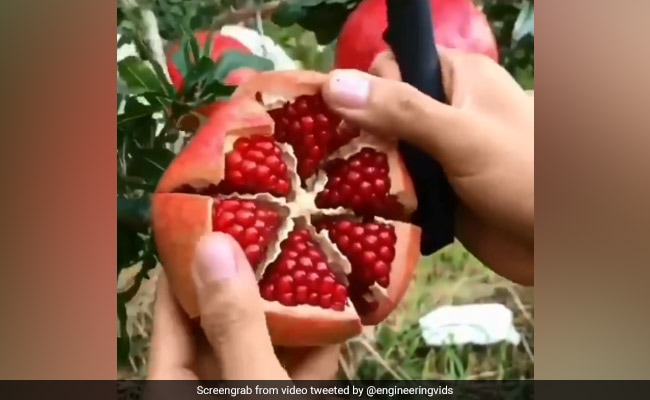 A lot of food hacks have gone viral on the Internet recently, and this video is only the latest in a long line. The video, which shows a person slicing a pomegranate perfectly, is blowing people's minds. It has collected nearly 3 million views on Twitter, where it was shared by an account called '@engineeringvids' on Friday.

As anyone who has ever tried to slice a pomegranate will attest to, it can be a messy task. However, this viral video makes it look effortless - some even say "obscenely beautiful".

In the video, a person uses a sharp knife to slice a pomegranate still attached to the tree. The video shows the top of the pomegranate being slice open meticulously to reveal six perfect segments. Watch it below:

How to effectively slice a pomegranate pic.twitter.com/WdeQwvqeMF

Since being shared online, the video has collected over 24,000 'retweets' and more than 1 lakh 'likes'. People were impressed by the pomegranate slicing hack and shared their appreciation in the comments section.

All these years and after hundreds of pomogranate later I see this...😭

Yesss this changes everything

Some people even tried the hack out and said that it worked for them.

Not AS easy as it looks, but not a bad method. (Shoutout to my local pomegranate angel who knows who he is.) pic.twitter.com/XGmeparUdg

It works. It's how we grew up cutting them (absent the vine).

In June, a garlic peeling hack video had gone massively viral online, collecting more than 21 million views. Before that, it was a video on how to peel a pineapple correctly that had captured the Internet's attention.

Let us know what you think of this pomegranate slicing hack using the comments section.