While anacondas are one of the heaviest snakes in the world, they are very fast in water. 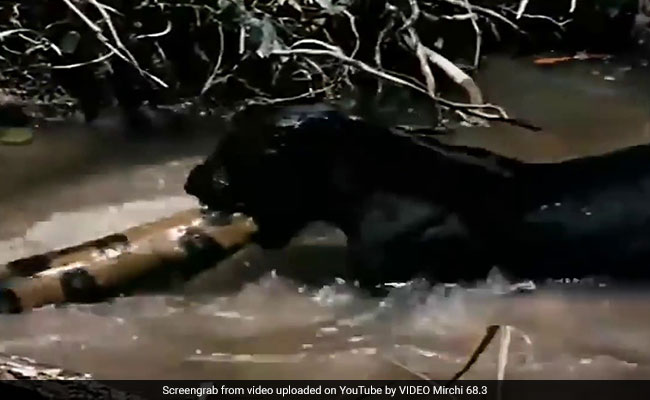 A black panther tries to drag an anaconda out of water.

An old video that has resurfaced online shows a fierce fight between a jaguar and an anaconda. A member of the boa family, South America's green anaconda is the biggest snake in the world. The jaguar, meanwhile, is the largest cat in the Americas. What happens when these two predators meet? A fierce battle in which each animal tries to drag the other towards the environment in which it is more comfortable.

In this video, a melanistic jaguar - also known as a black panther - is seen trying to drag the huge anaconda out of water. While anacondas are one of the heaviest snakes in the world and can weigh up to a 130 kgs, they are really fast in water. Their large size makes them fairly slow on land, so anacondas are almost always found living in or close to water bodies.

In this case, the snake tried to draw the black panther into a water body in a bid to gain the upper hand, but the big cat was able to drag it back to land.

This footage of a fight between an anaconda and a jaguar has been circulating online since at least 2013. It has been viewed thousands of times since it recently resurfaced on the microblogging platform Twitter.

You can watch the entire video here.

"The jaguar is impressive, a fantastic animal," wrote one Twitter user in the comments section.

Elon Musk, Now World's Richest, Once Didn't Have Cash To Have Car Fixed