"Residents got quite the show last week when this carpet python landed on their doorstep," the retirement village wrote on Facebook. 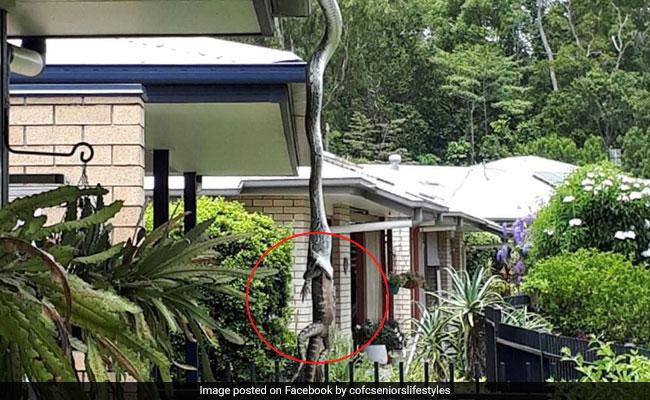 A huge snake was photographed eating a lizard in Queensland.

An enormous carpet python was filmed devouring a huge lizard in Australia recently. The snake was pictured hanging from the roof of a retirement village as it consumed its meal, giving the Internet a photograph that has left many shocked.

According to the Daily Mail, the carpet had slithered into the Churches of Christ Care Sanctuary Park Retirement Village in Nambour, Queensland last week.

"Residents got quite the show last week when this carpet python landed on their doorstep," the retirement village wrote on Facebook on Tuesday, sharing a picture that shows the non-venomous snake with the lizard in its mouth.

"With the drought, many native animals from the neighbouring national park are looking for water and food - this reptile found both!" they added.

The photo, clicked by a community worker at the retirement village, left some Facebook users impressed and others scared.

"What a great photo," wrote one person, while another thought it was "Time to move".

Retirement living manager Russell Elms said to 9 News that residents are used to seeing a "variety of native fauna" as the village backs into a national park.

According to Queensland Museum, carpet pythons are widespread and found throughout northern, eastern and southern Australia. Active during both day and night, they can be encountered "on the ground, in trees or buildings".

Virender Sehwag's Hilarious Video Will Remind You Of Your School Days