"You gave her Ranveer Singh's outfit from the Golden Temple?" one Instagram user asked. 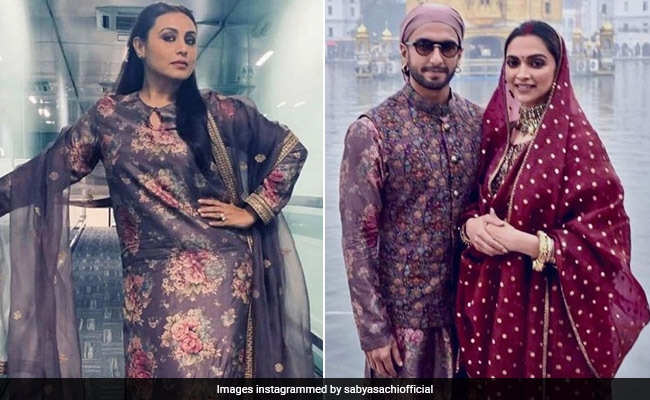 On Sunday, designer Sabyasachi Mukherjee shared two pictures of actress Rani Mukerji on Instagram. The pictures show Rani Mukerji dressed up for the promotions of her upcoming film Mardaani 2 in a purple Sabyasachi creation. While the floral printed kurta and churidaar set received many compliments on the photo and video-sharing platform, it also became the cause of much hilarity. Reason - the purple Sabyasachi kurta that Rani opted for bears a striking resemblance to the one that Ranveer Singh wore just a few days ago.

See for yourself the curious case of two Sabyasachi kurtas:

Since being shared online, Rani Mukerji's pictures have been flooded with comments. While many complimented her kurta, which she paired with a dupatta and golden sandals, others drew comparisons with Ranveer's outfit.

"Ye to Ranveer Singh ke kurta ka bacha hua kapda hai (This is leftover material from Ranveer Singh's kurta)" quipped one Instagram user. "Ranveer, did you exchange your outfit with Rani?" another asked, while a third wrote: "Why would you make Rani wear Ranveer's outfit?"

Produced by Yash Raj Films and directed by Gopi Puthran, Rani Mukerji's Mardaani 2 is set to hit theatres on December 13.

Who do you think wore the Sabyasachi kurta better? Let us know using the comments section.