The car burst into flames while at the restaurant's drive-through lane. 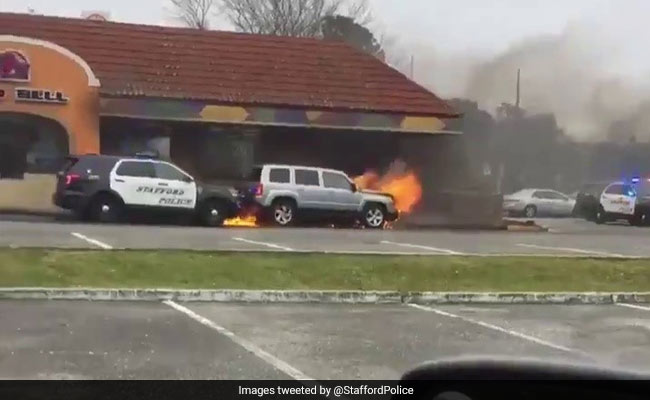 A police officer used his car to push a burning SUV away from a restaurant in New Jersey.

A quick-thinking cop pushed a burning car away from a restaurant in New Jersey, preventing a bigger accident. Late on Sunday afternoon, the SUV reportedly burst into flames while waiting in the drive-though lane of a Taco Bell outlet. Luckily, Stafford Township police officer Keith Oler arrived at the scene and pushed the car away from the restaurant, preventing the building from catching fire.

According to local reports, Officer Oler was able to push the burning car away as the fire began to spread from the vehicle to the lower portion of the restaurant. He managed to use his own police car to get the SUV to the open parking lot, where the Stafford Fire Department arrived to extinguish the fire.

A video of the incident, shared on social media by Stafford Police, shows the cop using his car to push the flaming SUV ahead. "Officer Oler arrived just in time to assist with a vehicle fire at the Taco Bell drive through today. Great job Officer Oler!!" wrote the police department while sharing the video.

On Twitter, many applauded the police officer for his bravery and presence of mind.

Great job Officer !!! Thanks for keeping us all safe, god bless you and the entire Police Dept.

According to a police spokesman, the SUV may have burst into flames due to a mechanical issue. Nobody was injured in the incident, including the occupants of the burning car. "The occupants of the vehicle were not injured and the building only sustained minor damage," said Captain James Vaughn.

This Student Transforms Herself Into Celebs With Incredible Makeup Skills