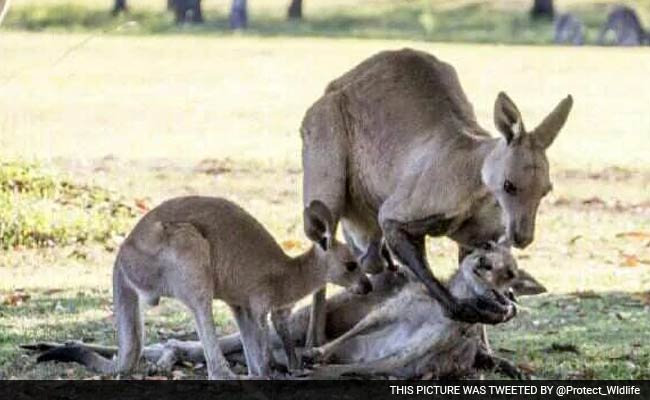 On Wednesday, The Daily Mail reported that photographer Evan Switzer had captured a moment of poignant grief in the animal kingdom out in Queensland, Australia: "I saw the male pick up the female, he looked like he was just trying to get her up and see what was wrong with her," Switzer reportedly said. "He would lift her up and she wouldn't stand she'd just fall to the ground, he'd nudge her, stand besides her . . . it was a pretty special thing, he was just mourning the loss of his mate."

Because cute animals are cute and people are kind of sad all the time, lots of folks ran with the idea. It was a real tear-jerker! But it seems this delightful anthropomorphism may be misguided: Several experts say that the kangaroo pictured is actually trying to mate with the dead female - and it's possible he even caused her fatal injuries.

Derek Spielman, a senior lecturer in veterinary pathology at the University of Sydney, told The Guardian that there's "no doubt" that the male was trying to mate with the deceased female. The male kangaroo is taking on an aggressive, protective stance - but it's almost certainly not due to sentimentality.

"Pursuit of these females by males can be persistent and very aggressive to the point where they can kill the female. That is not their intention but that unfortunately can be the result, so interpreting the male's actions as being based on care for the welfare of the female or the joey is a gross misunderstanding, so much so that the male might have actually caused the death of the female," Spielman told The Guardian.

In a blog post for the Australian Museum, principal research scientist Mark Eldridge pointed out that the male looks to be sexually aroused.

"The male is clearly highly stressed and agitated," Eldridge said.

The young joey in the picture may indeed belong to the dead female. But the male isn't propping the dead mother's head up for a parting glance. "[T]his is a male trying to get a female to stand up so he can mate with her," Eldridge concludes.

Wildlife Rescue Officer Leonie Petrie more delicately told the ABC that the male was likely "looking for some love."

"I have been before to kangaroos who have been hit by a car with a broken leg and the males are still chasing them down," she said (less delicately).

We humans are prone to imposing our own emotions and experiences on the rest of the animal kingdom. We see videos of animals being put into distressing situations and assume they're having fun, because they're not kicking and screaming.

Some psychologists believe that anthropomorphizing allows humans to feel more in control of the world. If we understand the motives and behaviors of other animals, we don't have to feel like we're surrounded by unpredictable strangers. But all joking aside, getting overly sentimental about an aggressive animal is probably not a great idea, should you ever encounter a "touching" display like this in person.

"These are not little people," Eldridge told the BBC, "they are kangaroos."