Man Steals Ice Cream On Live TV - But Is The Viral Video Staged?

The video has collected more than 3.6 million views 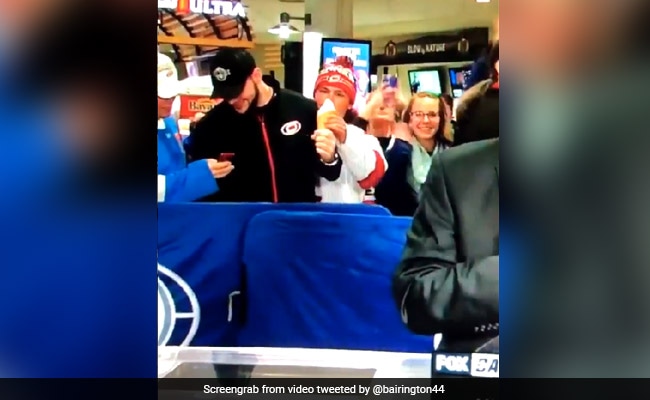 A man was seen stealing an ice cream cone on live TV.

A hilarious video of a sneaky ice cream  thief stealing a cone right out of an unsuspecting victim's hand has gone crazy viral online. Footage of the crime was aired during a live Fox Sports broadcast on Monday, according to The Mirror, and soon went viral on Twitter. In the video, a news anchor reports on an ice hockey match as fans mill around in the background.

Many viewers were quick to notice the moment one man, now identified as Weston Davis, gently lifts an ice cream cone from another man's hand as he is distracted on his phone. As the owner of the cone becomes aware of the theft and looks around, Mr Davis manages to get lost in the crowd with his loot.

He is now being praised on social media for what many are calling the "greatest heist ever". Watch the video below:

so i'm just watching the @Canes game and... pic.twitter.com/zIXTV8m5yk

The hilarious video has collected over 3.6 million views since being shared on Twitter. Many have hailed the ice cream thief for his skillful theft of the cone.

That was unreal. Insane skill.

The greatest heist of all time https://t.co/Wax60djPcX

However, many also raised doubts about the authenticity of the video, saying that it looked staged.

So is the video staged? After many social media users pointed out that it looked fake, the ice cream thief, Weston Davis, came forward to admit that he knew the victim and insist that it wasn't a set-up.

According to Fox News, Mr Davis later confirmed that he knew the victim, Joe Campen. However, he insisted that though they are long-time "good friends", Mr Campen did not know about the theft he was planning.

"Joe and I are good friends," said Mr Davis, according to Fox News. "He was standing there behind the camera and I just thought I'd mess with him, hoping maybe the camera would get a shot of it."