A video shows the two men hugging after the incident 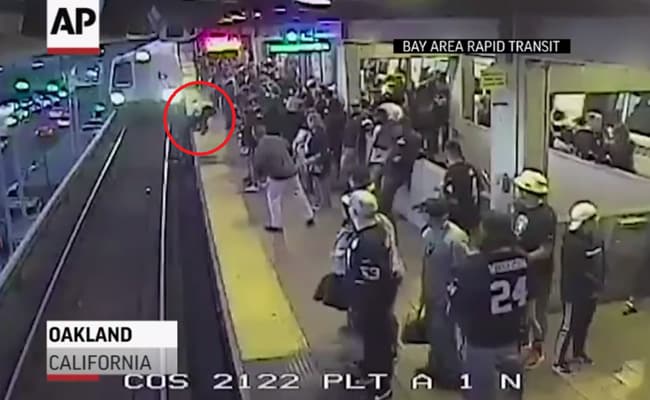 A dramatic video shows a transit worker saving a man from an oncoming train.

A dramatic video has captured the moment a California rapid transit employee saved a man who fell onto the tracks as a train was approaching the platform. Footage released by Bay Area Rapid Transit (BART) shows the incident unfolding at the busy Coliseum station on Sunday.

In the video, a man falls down to the railway tracks from the platform. The transit worker, identified as John O'Connor, quickly drops to the floor to grab him as a train approaches. He manages to yank the man out just as the train arrives at the platform, probably saving his life. The heroic act was captured on the station's surveillance camera, and you can watch the video above.

Another video, posted to Twitter by a bystander, shows the two men hugging after the incident.

This #BART worker just saved this man from falling onto the tracks as the train was approaching! Amazing!! pic.twitter.com/RX3zD36853

"There wasn't a lot of time to think," said Mr O'Connor after the incident. "I just grabbed him and pulled him out... God pulled me there for a reason, I think."

CNN reports that according to a statement from BART, the unidentified man was intoxicated and accidentally fell onto the tracks.

"John was on the platform and ensuring everyone stayed away from the yellow safety strip," a BART spokeswoman told CNN in a statement. "A male who was intoxicated accidentally mis-stepped and fell into the trackway while a train was approaching. John saw this along with other riders and yelled at the man to get back onto the platform. The male didn't move quick enough so John grabbed him by the shoulders and pulled him up by rolling him over his body to safety. They stood up and hugged."